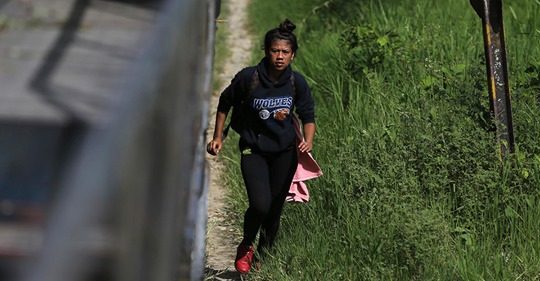 Migrant Woman Killed in Fall From Train in Mexico

An engineer shouted for the young migrant woman to hurry up and climb aboard the freight train or she’d be left behind. In her bright red tennis shoes, she quickened her pace and was the last to get on when it pulled out near Salto de Agua in Mexico’s southernmost state of Chiapas.

Hours later and about 27 miles to the west, the train stopped near the Tabasco state town of Tacotalpa and the woman hopped off to buy some cheese-stuffed rolls. When the train crowded with migrants began to move again, she hustled to clamber back aboard. But the train suddenly stopped and rolled back. She lost her grip and fell beneath its wheels. It dragged her 100 yards before jerking forward again in a thunder of shuddering steel.

“The people were screaming there. They yelled at those in front to stop, to the engine, but the engine accelerated,” said Catalina Leon Muñoz who lives alongside the tracks.

Frank Manuel Murillo, a 27-year-old Honduran who spent half his life in Houston before being deported a year ago, had also gotten off the train to buy some water. “When I turned around she was hanging from those wagons on the train,” he said Wednesday. “The train was running back, it hit so hard and she fell on the rails and then it cut her in half.”

The little-noticed death of 19-year-old Honduran Saily Yasmín Andino — her identity confirmed by local officials — added to a notorious toll claimed over the years by a train known as “The Beast,” a perilous stage on the migrant journey from Central America to the U.S. border.

Many migrants over the past year had tried to avoid such dangers by joining caravans of hundreds or thousands who trekked openly across southern Mexico.

Others bought bus tickets — or had Mexicans buy tickets for them — and traveled in relative safety. But the government has pressured bus companies to require identification when the tickets were purchased and people boarded. Foreigners without papers were not allowed on.

The government’s renewed crackdown on migration, spurred by threats of tariffs by U.S. President Donald Trump, has pushed many back to more risky strategies, often involving smugglers who sometimes pack migrants perilously into ill-ventilated truck trailers.

Some, like Andino, risked a ride on the rattling train to advance though a remote stretch of southern Mexico with hopes of getting off and making their way by other means.

But Mexican officials this week moved to squeeze that off as well. About 100 soldiers and immigration agents raided a train on Thursday and detained dozens of Central American migrants riding atop the cars.

They detained another 500 in a series of raids at hotels, bus stations and highways.

The government of President Andres Manuel Lopez Obrador said last week that it has completed the deployment of 6,000 National Guard members to regulate immigration along its southern border, with thousands more reportedly focused on restricting migration elsewhere in the country.

While no security forces were in sight as hundreds of migrants clambered aboard the freight train in Palenque just after midnight or as it rolled through Tacotalpa Tuesday morning, immigration authorities raided it later that night, according to Murillo, who said he spotted the roundup and escaped.

Two days later, Associated Press journalists saw the train roll to a stop in a rural area, and then soldiers climbed ladders to the top of freight cars shouting, “This is the army, you’re surrounded!”

Hundreds of migrants scrambled away through the brush, but the government said it detained 40.

Train operators themselves long ago gave up trying to keep migrants off the train, overwhelmed and perhaps intimidated by the sheer numbers.

Meanwhile 134 migrants were discovered in a crowded tractor-trailer abandoned along a highway in Veracruz state, according to a joint statement from several federal agencies. Soldiers and federal police found the trailer as people were trying to break the locks from inside to get out, it said. Some were dehydrated and had minor injuries.

Mexico’s 697-mile southern frontier with Guatemala and Belize has never been secured and little infrastructure exists to do so. Much of it is sparsely populated and remote.

Most of those on “The Beast” had already walked three days from the Guatemala border to reach the train. It hadn’t passed for several days, so a growing number of migrants waited along the tracks, camped in an adjacent park or in a nearby shelter.

When it arrived, some piled into open gondolas, sheltered from tree limbs. Others crowded onto small platforms between boxcars, while still others opted for breezy but exposed rooftops in the suffocating 100-degree heat.

Standing beside the train in Palenque Monday evening, Murillo had worried about an immigration raid on the train.

He had made the trip a month earlier, but was caught by Mexican immigration authorities in the northern border city of Reynosa and deported back to Honduras. That time he made it across Mexico in six days, travelling by train to Mexico City and then by bus to the northern border.

This time he had walked three days from the Guatemala border, circumventing highway checkpoints by hiking through the brush. Other transportation was not an option.

When the train stopped for a couple hours Tuesday morning near the town of Salto de Agua, migrants climbed off to buy water. One man extended his cap to passing motorists asking for spare change. A cluster of young men pooled their coins and shared corn tortillas and a tin of sardines beneath a tree.

When it began to lurch and groan into motion, migrants in the open gondolas pressed into manufactured shade under branches they had pulled from overhanging trees. They said they hadn’t slept much during the overnight ride and the temperature was again rising toward triple digits.

Andino was the last to climb aboard.