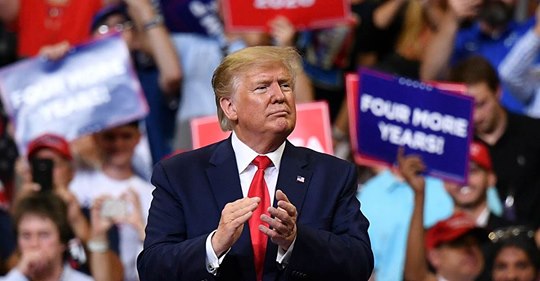 President Donald Trump’s re-election efforts announced a massive fundraising haul Tuesday of $105 million in the last three months, with an additional $100 million in the bank, far outpacing any predecessor or Democrat currently running.

The Trump 2020 campaign and associated committees raked in $54 million in the second quarter of the year, while the Republican National Committee raised another $51 million. In the 24 hours surrounding his official re-elect announcement in Orlando last month, both entities brought in $24.8 million, more than one million dollars per hour.

As an incumbent and titular leader of the GOP, the president benefits from the infrastructure of the RNC and its joint fundraising committees.

“Our massive fundraising success is a testament to the overwhelming support for President Trump,” said Trump campaign manager Brad Parscale. “No Democrat candidate can match this level of enthusiasm or President Trump’s outstanding record of results.”

The campaign and RNC doubled its online fundraising from $31 million in the first six months of 2018 to $62 million in the same period this year, notably raising more through small-dollar internet donations in the second quarter than the whole first half of last year.

Trump is the only president to ever to file re-election paperwork on the day he was inaugurated, which gives his campaign a tremendous advantage in terms of raising money and reaching new donors during his time in office.

During the first three months of 2019, the re-election efforts brought in a combined $76 million.

Trump’s entire 2016 campaign raised a total of $333 million and Parscale has said he believes they may spend $1 billion this time around, which would be three times more than what Trumop’s campaign spent in 2016.

A full list of donors, including how many contributions were under $200, will not be released until the campaign files an official report with the Federal Election Commission, which is expected by July 15.

By comparison on the Democratic side, South Bend Mayor Pete Buttigieg announced Monday that his campaign brought in $24.8 million in the second quarter, an impressive figure for a candidate who was not very well-known when he announced his bid for the White House earlier this year.

Other contenders such as former Vice President Joe Biden and Sens. Kamala Harris and Elizabeth Warren have yet to reveal their recent fundraising totals.