Soldier Realizes His Dream of Becoming a U.S. Citizen 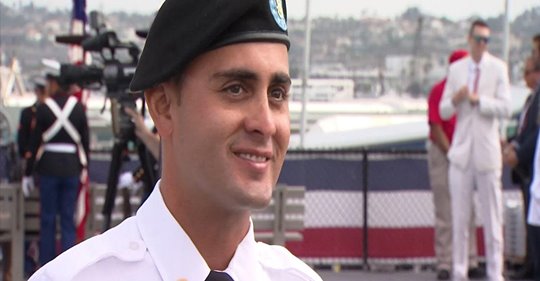 Independence Day celebrations are not over just yet, as many families just started their own celebrations.

The USS Midway held a naturalization ceremony Friday, where a total of 52 immigrants became new Americans. The ceremony included 22 service members and veterans.

One of those new citizens is Angel Reyes, who serves in the Army and is from Mexico.

He finally was able to take his oath of allegiance.

This ceremony is part of 110 naturalization ceremonies being held by the U.S. Citizenship and Immigration Service since July 1.

These ceremonies were dedicated in celebrating the Declaration of Independence, and the birth of the country, by welcoming a total of 7,500 new citizens in cities across America.

These new citizens came from 19 countries, including Bolivia, the Philippines, Ethiopia, and Venezuela.

Reyes said, while holding back tears, he is finally realizing his American Dream.

“I feel very emotional because it was one of my goals to become a U.S Citizen when I arrived here from Mexico because I want to be an officer in the Army,” Reyes said.

Reyes currently serves as a 74 Delta CBRN Specialist, and he can’t wait to serve the Army as a citizen.

“This day is important to me because now it makes sense to serve this country because I’m naturalizing today,” Reyes said.