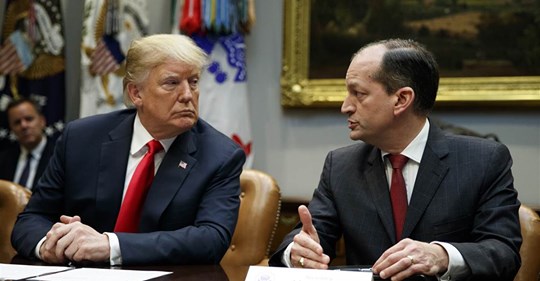 Trump defends embattled Acosta, says he had a ‘falling out’ with Jeffrey Epstein ‘a long time ago’

President Donald Trump defended his embattled labor secretary, Alex Acosta, on Tuesday and said that he had a “falling out” with politically connected sex offender Jeffrey Epstein a number of years ago.

“I had a falling out with him a long time ago,” Trump told reporters at the White House about his relationship with Epstein, who was arrested over the weekend on sex trafficking charges. “I don’t think I’ve spoken to him for 15 years.”

“I was not a fan of his. That I can tell you,” Trump added. Trump did not respond to a question about what the falling out was about.

Epstein, 66, was arrested over the weekend and charged in the Southern District of New York with sex trafficking dozens of girls as young as 14 in New York and Florida.

In an earlier case against Epstein, in 2008, Epstein pleaded guilty to procuring a person under 18 for prostitution and felony solicitation of prostitution, which required him to register as a sex offender and serve about a year in a Florida county jail. He was able to leavealmost daily for work, and was allowed to have his own private security detail behind bars.

Trump told reporters at the White House that Epstein was “a fixture in Palm Beach” and said, “I knew him like everyone in Palm Beach knew him.”

“He’s a lot of fun to be with,” Trump said then. “It is even said that he likes beautiful women as much as I do, and many of them are on the younger side. No doubt about it — Jeffrey enjoys his social life.”

Labor Secretary Acosta, who was the U.S. attorney for the Southern District of Florida at the time of the original Epstein criminal case, has faced calls from Democrats to resign his cabinet post following the latest Epstein charges. But Trump praised the Cabinet member Tuesday for his job performance.

“He’s been just an excellent secretary of labor,” Trump said, adding that multiple officials involved with the 2008 case probably “would wish they’d maybe done it a different way.”

Acosta’s office reached the secret non-prosecution deal in 2008 with the wealthy financier to halt the federal sex abuse investigation involving dozens of teenage girls in return for him pleading guilty to lower state charges involving a single victim.

Earlier Tuesday, Acosta defended his role in securing the deal for Epstein.

The latest charges against Epstein, however, allege that Epstein trafficked girls as young as 14 in New York and Florida during the same time period as the earlier Florida probe. The 2008 agreement with Acosta’s office did not protect Epstein from being prosecuted for alleged crimes in parts of the country other than South Florida, and prosecutors in New York say their case involves new victims and new evidence, including a cache of incriminating pictures that were found in a vault in Epstein’s Manhattan mansion.