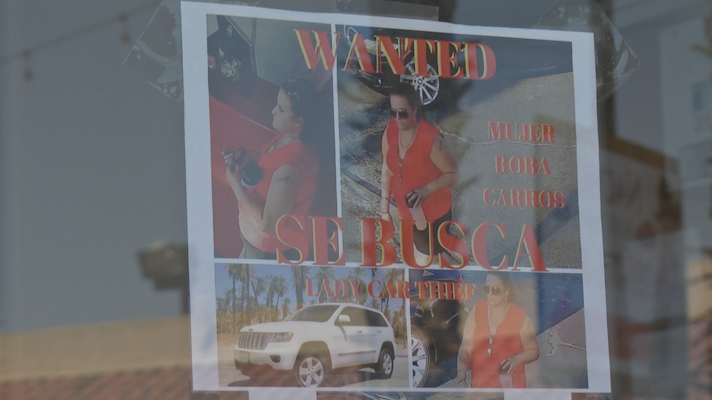 A would-be test drive turns into a grand theft auto at Nacho’s Auto Sales in Indio. Now, Nacho Bustillos, the owner of the dealership wants justice.

“Did she really take off with it? Is she really running away with it or just decided to take it? Is she coming back?” said Bustillos as he described the scene,

In fact, Nacho is still filled with questions after a woman drove off with a car before his eyes.

“So I ask her, do you want to test drive, I’ll go with you…but she said no, I am waiting for my husband. So, I’m like okay. So I get a little more relaxed and she says I’m going to close the door so that I can see the odometer.”

However, she put her foot down and sped off with the white grand Cherokee that was in his lot instead.

“I was in panic and I said you know I know where she’s going but once I got into the car, I couldn’t see her anywhere.”

Nacho tells NBC Palm Springs he felt hopeless seeing her drive away with the car. At this point in time, he knew two things: he was down a car, and did not have a way to identify the woman. Fortunately, though, the surveillance system recorded the whole ordeal.

So, at this point, officials are confident it is only a matter of time before they find the thief. News that puts Nacho in good spirits, although he can;t help but feel disappointed that someone would do something like this.

“You can’t be at peace, you know, just a learning experience for us. This is a call for all salesmen. Hey be careful, don;t let those keys off that easy.”

At this time, officials are asking for the public’s help in identifying the woman who drove off with the car. If you have any information on her whereabouts, contact the Indio Police Department immediately.