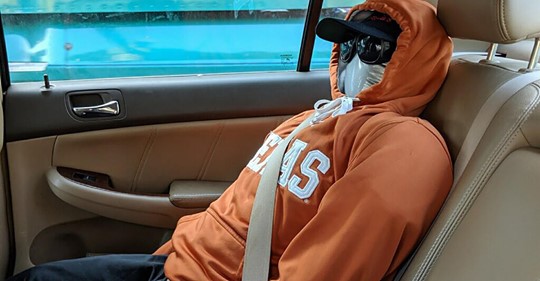 File this next occurrence under a failed attempt at ingenuity.

A driver in New York City unsuccessfully used a dummy to ride in the carpool lane and was eventually busted by cops.

According to a tweet by the NYPD Highway Patrol, the motorist was stopped and subsequently issued a ticket for driving in the High Occupancy Vehicle (HOV) lane in Brooklyn with a homemade dummy in the backseat.

The epic fail is even more hilarious thanks to the NYPD providing a photo of the dummy.

A motorist was stopped and issued a summons by @NYPDHighway Unit #2 Police Officer Gatto for driving in the High Occupancy Vehicle (HOV) Lane in #Brooklyn with a homemade dummy in the backseat. #NYPD pic.twitter.com/f3g5UnB5Sc

The backseat “passenger” was dressed in a bright orange long-sleeved sweatshirt with the hoodie pulled up over its “head”, long black pants, a dark hat and dark sunglasses.

Best of all? It was wearing a seatbelt.

However, needless to say, it was not dressed for the high temperatures the New York City metro region has been experiencing recently, which begs the question: was the fashion faux pas what gave it all away?