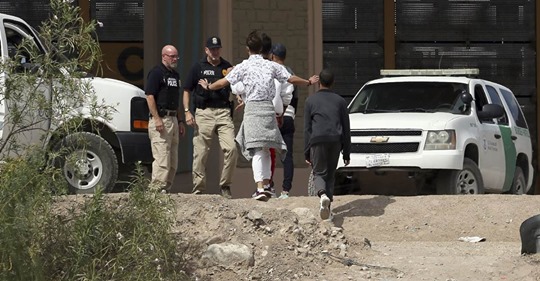 The Trump administration announced Monday it will move to end asylum protections for most Central American migrants in the government’s latest major attempt to restrict the influx of migrant families coming to the United States.

The new rule says asylum-seekers at the southern border who pass through another country and do not seek asylum there will not be eligible for the protection in the U.S., according to a statement from the departments of Justice and Homeland Security.

As a practical matter, it means that migrants coming from Honduras, Guatemala and El Salvador cannot seek asylum if they didn’t first do so in Mexico. The rule would also apply to many other asylum-seekers who come to the U.S. southern border from other countries.

“Until Congress can act, this interim rule will help reduce a major ‘pull’ factor driving irregular migration to the United States and enable DHS and DOJ to more quickly and efficiently process cases originating from the southern border, leading to fewer individuals transiting through Mexico on a dangerous journey,” acting Homeland Security Secretary Kevin McAleenan said in the statement.

The change is a unilateral move by the Trump administration and has not been agreed to by Mexico. American officials were negotiating a similar deal with Guatemala, which would have required immigrants from El Salvador and Honduras to apply for asylum there. But that deal, and a meeting with Guatemalan President Jimmy Morales, was abruptly called off Sunday after the Guatemalan Constitutional Court ruled against the proposal.

The new rule is subject to three exceptions, according to the statement. The exceptions were for migrants who did apply for protection in at least one of the countries and were denied, migrants who demonstrate they meet the definition of a “victim of a severe form of trafficking in persons,” or came to the U.S. through only a country or countries that were not parties to the 1951 Convention relating to the Status of Refugees, the 1967 Protocol, or the Convention against Torture and Other Cruel, Inhuman or Degrading Treatment or Punishment.

The rule is set to be published in the Federal Register on Tuesday and would be effective immediately, according to the statement.

It is likely to face a legal challenge from immigrant rights and civil liberties groups.In the past, federal judges have blocked other attempts by the administration to change the asylum policy, most notably the president’s effort to deny the protection to anyone who did not enter the U.S. through a legal port of entry.

The American Civil Liberties Union said Monday morning it would “sue swiftly” over the rule.

“The Trump administration is trying to unilaterally reverse our country’s legal and moral commitment to protect those fleeing danger,” Lee Gelernt, deputy director of the Immigrants’ Rights Project at the ACLU, said in a statement. “This new rule is patently unlawful and we will sue swiftly.”

Under U.S. and international law, a person may seek asylum based on persecution or a well-founded fear of future persecution because of race, religion, nationality, political opinion or membership in a particular social group. As a signatory to an international asylum treaty, the U.S. has a legal obligation to provide protection and certain rights to people who arrive at the border seeking asylum.

Administration officials said the immigration system has been swamped by asylum-seekers, with cases in immigration courts tripling between 2013 and 2018. But the number of people actually granted asylum is a small fraction of the total applicant pool.

The rule said it “mitigates the strain on the country’s immigration system by more efficiently identifying aliens who are misusing the asylum system to enter and remain in the United States rather than legitimately seeking urgent protection from persecution or torture.”

The move represents an escalation of President Donald Trump’s attempt to deter Central American families from coming to the United States to seek asylum. Earlier this year, the administration also enacted a policy forcing some migrants to wait in Mexico for the duration of their asylum cases. The administration has since been expanding the policy to force migrants to wait in multiple cities in Mexico.