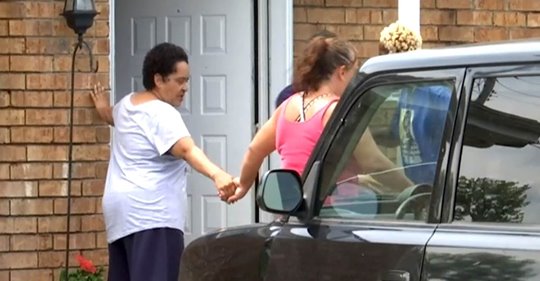 ICE came for their neighbor, so these Tennesseans formed a human chain to protect him

When U.S. Immigration and Customs Enforcement agents arrived at a Nashville home Monday in an attempt to detain a man there, neighbors and activists gathered to support the man, who remained shuttered in a van with a child for hours before the agents left.

“It was striking to watch neighbors deliver food, water, and gasoline to help their neighbor stay in his car,” Nashville Councilman Bob Mendes, who witnessed part of the incident, wrote in a statement. “Having watched this play out, I have a new appreciation for the practical difficulty cities face in dealing with ICE civil immigration enforcement.”

The ICE agents attempted to stop the white van in Hermitage early Monday morning, but when the driver would not stop, they followed him to a home, according to a statement from the Metropolitan Nashville Police Department.

The agents, driving unmarked vehicles, blocked the van in the driveway, catching the attention of neighbors, according to a statement from the Tennessee Immigrant & Refugee Rights Coalition (TIRRC), whose staffers responded to the incident.

Police, who reported to the scene after the ICE agents called them, reported that the man, who has not been identified, had a 12-year-old child with him in the van.

TIRRC said that the agents and Metropolitan Nashville police officers remained at the scene for several hours.

The neighbors who lent their assistance “reported that they were worried and outraged because some had known the family for more than a decade,” the TIRRC statement said.

Several people recorded and live-streamed the incident on social media.

“They told local media outlets that ICE ‘picked the wrong community on the wrong day,'” the statement said. “What happened this morning shows how deeply rooted immigrants are in our community.”

TIRRC’s statement said the ICE agents had “no judicial or criminal warrant to apprehend” the man, who was within his rights to remain in the van.

“ICE doesn’t have the authority to enter your home or private property without a warrant signed by a judge,” the TIRRC statement said. “The majority of the time, ICE only has an administrative warrant — not a judicial one.”

If ICE shows up at your house, DO NOT OPEN THE DOOR and know your rights. It's important in this time to make sure our neighborhoods are organized. pic.twitter.com/EO4fdZSC66

TIRRC questioned why police officers responded to the scene. “When immigrant community members and their families associate local police with federal immigration enforcement, they are less likely to report being a victim or a witness to a crime — making the whole community less safe,” their statement said.

Mendes said that he saw two marked police cars at the scene, and he was told a detective in an unmarked vehicle arrived during the hour he was there. Officers had their blue vehicle lights on shortly after arriving and then turned them off.

Mendes said he saw brief conversations between the officers and the ICE agents.

One officer told him “there were no known criminal warrants for the man in the van.” The officer said that police were there “to protect the public, the people in the van, and the ICE agents if necessary,” but otherwise, “would have no role.”

“The officers were instructed to not be involved in the service of the detainer, but to stand by from a distance to keep the peace if necessary,” said a statement from Metropolitan Nashville Police Department spokesman, Don Aaron.

“Our police officers do not actively participate in immigration enforcement efforts and only serve as peacekeepers,” Nashville Mayor David Briley reiterated in a statement, according to NBC affiliate WSMV.

“I am keenly aware that this type of activity by our federal government stokes fear and distrust in our most vulnerable communities, which is why we do not use our local resources to enforce ICE orders,” Briley said.

Last week, the Trump administration began immigration raids as part of an operation expected to target 2,000 immigrants, but it’s unclear if this situation was related to that effort. So far, 35 individuals have been detained as a result of the raids, ICE Acting Director Matthew Albence said during a news teleconference Tuesday. In a separate operation, carried out between May and July, 899 people were arrested by ICE.

ICE did not immediately respond to NBC News’ requests for comment regarding the Nashville incident.