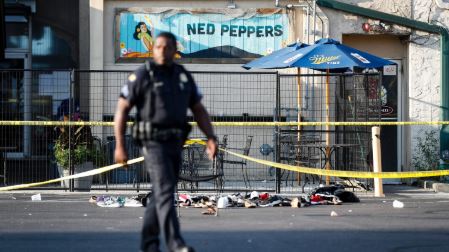 In this grief-stricken Ohio city, a gunman ripped apart nine families in less than a minute. Now relatives are grappling with both anguish and confusion as to why their loved ones were killed.

“It’s just a tragedy for no reason,” said Donna Johnson, who lost her nephew Thomas Nichols in the massacre Sunday morning.

Nine people were killed and 27 others were injured just as bars were closing at around 1 a.m. in Dayton’s popular Oregon District.

But the motive might never be known. The killer, Connor Betts, was gunned down by police about 30 seconds after his first shot, Dayton Police Chief Richard Biehl said.

While his motive remains a mystery, a dark picture is emerging of the shooter.

But the writings did not indicate any racial or political motive, sources said.

Former schoolmates said they were on a “hit list” Betts created back in high school. One described Betts as “dark and depressive.”

One former classmate, who was told by a school official that he was on the hit list, said the list was separated into two columns: a “kill list” for boys and a “rape list” for girls.

The gunman had 100-round drum magazines

Surveillance video shows the chaos unfold as a shooter targets people enjoying a Saturday night out in Dayton’s Oregon District.

As gunshots ring out, people start to run, ducking into bars and clubs.

Large groups pour into open doorways, escaping the shots that riddle the street.

Within seconds, the shooter is brought to his knees by police just before he’s able to enter a nightclub.

“The officers immediately advanced toward the gunfire and within approximately 20 seconds, they engaged the suspect, who was actively firing and attempting to enter a crowded liquor establishment,” the police chief said.

“The threat was neutralized at approximately 30 seconds of the suspect firing his first shot.”

But the devastation was already done. Betts managed to fire dozens of shots with a .223-caliber high-capacity rifle with 100-round drum magazines.

Nine states, plus the District of Columbia, ban large-capacity ammunition magazines. Ohio isn’t one of them.

Back in Ohio, Dayton Mayor Nan Whaley emphasized that just a few seconds of shooting led to nine deaths.

“I really want to think about that minute,” she said. “The shooter was able to kill nine people and injure 26 in less than a minute.”

The victims range from 22 to 57 years old

The city of Dayton identified the nine people killed in the shooting:

The gunman’s sister is among the dead

Megan Betts, the sister of the suspect, was one of the nine people killed.

Police did not detail the Betts siblings’ relationship. But they did say that the two arrived together but separated at some point.

Biehl said the shooter killed his sister and wounded his male companion.

Authorities said they don’t think the male companion, who had driven to the scene with the shooter and his sister, had advance knowledge of the attack, two law enforcement sources told CNN.

Bellbrook Police Chief Doug Doherty has been in touch with Betts’ parents, who are not ready to talk about the deaths of their two children, Doherty told CNN affiliate WLWT.

“They are victims, and we’re treating that as such — them as victims,” he said.