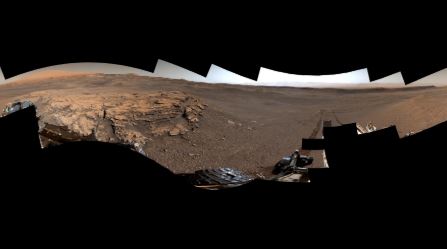 NASA’s Curiosity rover has been acting as our detective on Mars this summer and investigating an area once full of streams and lakes on the red planet.

The rover landed on Mars seven years ago and since then, it’s sent back thousands of images, roamed 13 miles and climbed 1,207 feet to its current home on the side of Mount Sharp. This feature is located inside of Gale Crater, where streams and lakes could once be found billions of years ago.

Gale Cater is a vast and dry ancient lake bed with a 16,404-feet-tall mountain at its center. Mount Sharp’s peak is taller than the rim of the crater.

Now, Curiosity is investigating the clay minerals left behind after the water disappeared. It has drilled 22 samples of the surface.

“This area is one of the reasons we came to Gale Crater,” said Kristen Bennett of the US Geological Survey. “We’ve been studying orbiter images of this area for 10 years, and we’re finally able to take a look up close.”

During its mission, Curiosity has encountered the most amount of clay minerals on Mount Sharp. The minerals were first detected by the Mars Reconnaissance Orbiter years before Curiosity launched.

Now that Curiosity can conduct investigations on the ground, it’s found more clay minerals, which is causing mission scientists to question why some were apparent to the Orbiter and others weren’t.

Over the summer, Curiosity has passed through a “pebble parking lot” and studied other unique geologic features on Mars. Recently, the rover’s camera captured a panorama of the Teal Ridge outcrop and Strathdon, a rock comprised of wavy sediment layers that could have been sculpted by wind, water or both.

“We’re seeing an evolution in the ancient lake environment recorded in these rocks,” said Valerie Fox, co-lead for the clay campaign at the California Institute of Technology. “It wasn’t just a static lake. It’s helping us move from a simplistic view of Mars going from wet to dry. Instead of a linear process, the history of water was more complicated.”