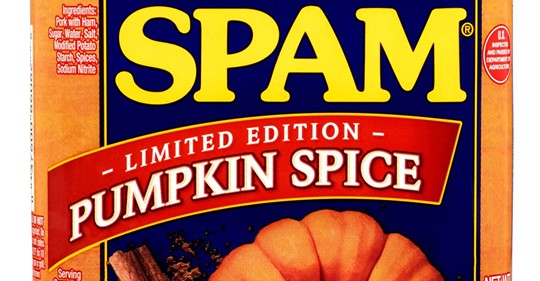 Forget changing leaves and brisk breezes — pumpkin spice is the official harbinger of fall. And, for better or worse, Spam is entering the flavor fray.

There’s no pumpkin in this pork: It’s mixed with cinnamon, clove, allspice and nutmeg, according to the spokesperson.

What could a sweet mystery meat possibly pair well with? Spam recommends topping waffles with it, adding it to a fall vegetable hash or baking it into a cornbread muffin.

Honestly, waking up to a warm stack of Spam-and-waffles on a chilly fall morning sounds kinda nice.

Could this sweet SPAM be the tipping point for pumpkin spice fatigue? It’s not likely–people go crazy for the flavor, and it’s rooted in neurology: Sugar and pumpkin spice are an addictive combination that the brain learns to crave, Longwood University assistant professor of psychology Catherin Franssen told CNN in 2017.

And with seasonal marketing from pumpkin spice pushers like Starbucks, brains and bodies begin to associate autumn and comfort with the flavor, she said.

So if you’re into pumpkin spiced Spam, don’t be ashamed. You’re just wired that way.