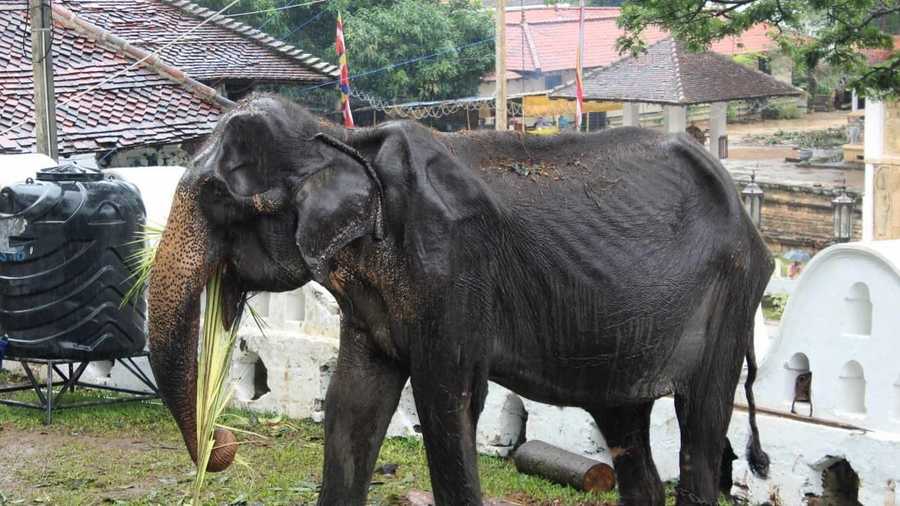 Animal rights campaigners have called on tourists in Sri Lanka to boycott elephant attractions after photographs of a malnourished female reportedly used in a festival were circulated online.

Images of the emaciated elephant were shared by Save Elephant Foundation to raise awareness of exploitation in captivity.

“This is Tikiri, a 70 year old ailing female. She is one of the 60 elephants who must work in the service of the Perahera Festival in Sri Lanka this year,” Lek Chailert, founder of Save Elephant Foundation, posted to Facebook.

“Tikiri joins in the parade early every evening until late at night every night for ten consecutive nights, amidst the noise, the fireworks, and smoke. She walks many kilometers every night so that people will feel blessed during the ceremony,” the post read.

The Esala Perahera festival in Kandy, Sri Lanka, is an annual Buddhist festival and features attractions including dancers, performers and decorated elephants, which are often adorned in elaborate costumes.

“No one sees her bony body or her weakened condition, because of her costume. No one sees the tears in her eyes, injured by the bright lights that decorate her mask, no one sees her difficulty to step as her legs are short shackled while she walks,” Chailert added.

The Save Elephant Foundation, which is based in Thailand and provides care to captive elephants in the region, is urging people to write to the prime minister of Sri Lanka to ask him to intervene.

“At this stage we are asking people to lobby the Sri Lankan government to take immediate action,” Save Elephant Foundation told CNN.

A petition urging the country’s leader to “end this barbaric torture and abuse” has gained more than 8,000 signatures.

Following the outcry over Tikiri, the elephant has been withdrawn from the closing parade, organizers said.

The chief custodian of the Temple of the Tooth, which coordinates the festival, Pradeep Nilanga Dela told AFP News Agency that Tikiri would not be part of the grand finale, and that she was being “treated”.

But campaigners say authorities must act more broadly against such attractions.

Elisa Allen, director of animal welfare charity PETA, said that elephants were frequently exploited at tourist destinations and in temples.

“Sri Lankan authorities must stop allowing such atrocious cruelty and send this poor elephant to a reputable sanctuary where she can be assessed by veterinarians and, if treatment is viable, live out her remaining years in peace,” Allen said in a statement to CNN.

Elephants did not naturally obey human commands or allow humans to ride them, she stressed.

“Tourists visiting Sri Lanka can help elephants by refusing to ride them and by avoiding any attraction that offers or endorses elephant rides, keeps the animals chained, or forces them to perform,” Allen added.