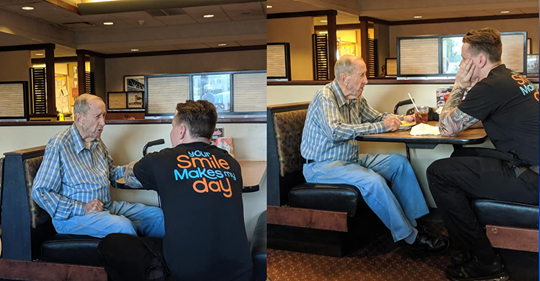 The restaurant Eat ‘N Park is synonymous with the infamous Smiley Cookies, but this weekend, a young server at the Belle Vernon (PA) Eat ‘N Park served up a few smiles of his own.

Thousands of people on Facebook have reacted to this young man’s good deed.

Customers at the Belle Vernon Eat ‘N Park appreciate server Dylan Tetil for his caring and charismatic ways and on Friday night, one customer, in particular, caught his eye and his ear.

A patron in a nearby booth snapped pictures of Dylan and his 91-year-old customer. Tetil kneeled down to take his order because the gentleman has hearing troubles.

The conversation, however, turned into more than what was on the menu.

“[I] listened to some of his stories,” Tetil recalled. “He was talking about the war, some of the injuries he had, the places he’s been, his family. Tears were just running down his face. You can just tell this man hasn’t had a true, caring person to talk to in a long time.”

The man told Dylan he was lonely and had few people to talk to.

With nearly 100,000 likes on Facebook and over 30,000 shares, people are talking about Dylan’s act of kindness.

“I believe you giving someone five minutes of your day could completely rearrange how they look at life itself honestly. A lot of people might think the youth today isn’t the best and I might have changed their perspective.”

Because if a smile can make one person’s day, a kind gesture can impact thousands who share it.

“That’s how I think the world should operate and the world would be a better place,” Dylan said.