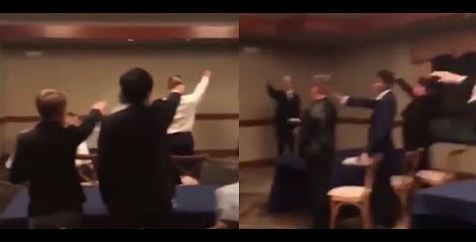 California school reopens an investigation of a Nazi salute video, saying other images have emerged

A Southern California school district is reopening an investigation into video showing students giving a Nazi salute, with one official saying unspecified new photos and video have emerged.

The Garden Grove school district in Orange County announced the new probe Tuesday night just before a tense school board meeting in a community angry after learning high school officials knew about the salute video months before it became public this week.

Pacifica High School Principal Steve Osborne apologized at the meeting for not informing the community earlier — and said officials have gotten “new allegations, new photos and video … and new claims that have led us to reopen and widen the scope of the investigation.”

At issue, to start with, is a November video appearing to show Pacifica High School students raising their arms in a Nazi salute, and at least one of the students singing a Nazi-era marching song.

The eight-second video was recorded before an off-campus student athletics banquet, in a room where the students were unsupervised, the Garden Grove Unified School District said.

After a small group of students shared it on social media, high school administrators learned of it in March and “addressed the situation with all students and families involved,” the district said in a statement.

But even district-level officials, they say, didn’t know of the video until this week, when the The Daily Beast published it.

The revelation roiled teachers and residents who say they should have been told long ago — and it has the district scrambling to promise it will investigate further and battle any hate and bias in the schools.

“Rest assured that any students engaging in hate speech or activities will face disciplinary action in accordance with California Education Code,” the district said in a news release Tuesday.

“We deeply apologize for the pain this has cause our community and the national community at large.”

The school hasn’t said how the students in the November salute video were disciplined, citing federal law that protects student records.

Parents and teachers used Tuesday night’s school board meeting to criticize the high school’s initial secrecy over the salute video.

“How are we to battle (extremist ideology) if we aren’t even made aware of it?” Randy Steiner, a parent of a Pacifica High student, said when the board gave him a chance to speak.

“Not being able to both directly and publicly confront this sort of behavior makes us feel like we were robbed of a significant teaching opportunity. And frankly, it made us feel like fools,” Tourtellotte said.

“The obscure nature of the song, the premeditated nature of the act, as well as the response taken by our institution suggests the need for a systemic look at our school and district culture, and I fear it’s not an isolated incident,” she said.

Osborne, the principal, acknowledged the school administration “did a disservice to the entire school community by limiting our action to the small group of students involved.”

“We are sorry that our investigation and our transparency with the Pacifica community fell drastically short. In retrospect, our judgment was wrong and we take full responsibility for that,” he said.

The school district said it will work with community partners, including Anti-Defamation League and the Simon Wiesenthal Center’s Museum of Tolerance, as it considers developing and expanding anti-bias programs.

Part of that, the district said, will be making sure students and staff “understand their role in speaking out about hate and bias at schools.”

Other times high schoolers have given Nazi salutes

This was just one among recent cases of US students being caught on video giving the Nazi salute.

High school students in Newport Beach, California, were at a party earlier this year laughing as they raised their arms in the Nazi salute next to a swastika made of plastic cups.

The photo prompted Anne Frank’s stepsister, Eva Schloss, to visit the students and educate them on why such symbols were painful and offensive.

Wisconsin high school students posed for a photo in spring 2018 giving the Nazi salute. The school district decided not to punish the kids after a 10-day review, citing First Amendment protections.