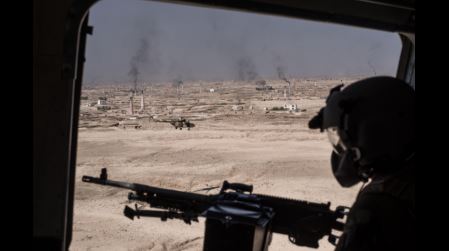 The coalition’s statement said the names are being withheld for 24 hours while families are notified.

While details surrounding the deaths were scarce, the news of more American deaths in Afghanistan comes as the Trump administration continues to engage in discussions about a potential US withdrawal from the country after nearly 20 years at war.

Taliban attacks have not slowed down in recent years or months, even as the US has continued talks with the group.

President Donald Trump said Tuesday that the US is talking to the Afghanistan government and the Taliban and he is “looking at different things” in the region.

Speaking at the White House, Trump lamented about the US involvement in the country, which is nearing its 18th year, calling it “ridiculous” and repeating a claim that the US “could win that war in a week if we wanted to” but that he does not “want to kill 10 million people, 10 million Afghans … because that’s what would have to happen and I’m not looking to do that.”

Trump said the US is “bringing some of our troops back but we have to have a presence.”

The area “does seem to be the Harvard University of terrorism,” Trump said.

He said the US is “negotiating — we’ll see what happens,” but that the Taliban could stop unrest in the region “very easily.”

That plan is expected to formalize a significant withdrawal of US forces from Afghanistan — from about 14,000 troops to 8,000 or 9,000 troops — and enshrine official commitments by the Taliban to counterterrorism efforts in Afghanistan, according to the multiple sources familiar with the discussions.