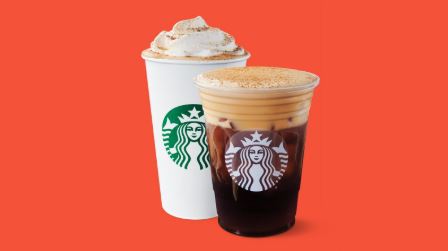 Starbucks has sold nearly half a billion Pumpkin Spice Lattes over the past decade and a half, and this year it’s hoping to satisfy people’s insatiable thirst for PSL drinks with a new option.

Beginning Tuesday it will sell a Pumpkin Cream Cold Brew drink for the first time. That’s in addition to the hot Pumpkin Spice Latte, which has attracted a cult following for the company.

The new “deliciously fall” drink combines pumpkin spice flavoring and cold brew coffee, the company said. It’s topped with pumpkin cream cold foam and a dusting of pumpkin spice topping. Prices start at $4.45 for a grande, but vary depending on location.

Cold drinks are growing in popularity for Starbucks. They made up more than half of the company’s sales last year — a 13% increase from 2013, it said. In its most recent earnings, Starbucks credited cold drinks, like cold brew coffees, for bolstering its bottom line and helping to kickstart sales in the afternoon, which previously has been a sore spot for the company.

In addition to the two drinks, Starbucks on Tuesday is bringing back the Salted Caramel Mocha and pumpkin-flavored baked items, including a pumpkin scone and a pumpkin cream cheese muffin.

The pumpkin spice craze isn’t slowing down. Sales for pumpkin-flavored items increased nearly 5% in 2018 to $511.5 million, according to new data from Nielsen provided to CNN Busines

Starbucks’ new cold options also land at a time when pumpkin spice season seemingly starts earlier every year and the weather is still hot. The company told CNN Business that “PSL” season is only beginning a day earlier compared to last year.