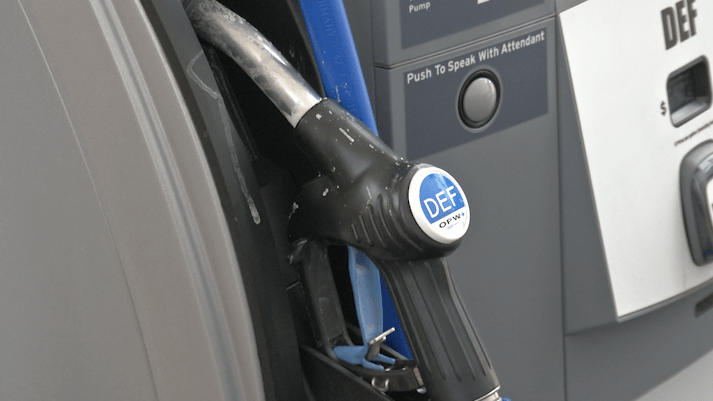 Next time you fill up at the pump, pay attention. A  gas pump mix up is costing people in Beaumont thousands of dollars.

The Chevron gas station off the Beaumont exit on Interstate 10 is where at least nineteen people had their cars towed ever a span of three to four weeks, according to the towing company across the street, a year ago.

The owner of Dom’s Towing, Dom Desch, said customers are using the blue pump containing DEF, or Diesel Exhaust Fluid. DEF has been confused with normal gas which wrecks a standard car.

“If you put that in your vehicle, it will eat up your fuel pump and anything rubber,” Desch said. “I have had to tow many away and I’ve had to take some to LA.”

The gas station is the only one between Beaumont and Palm Springs to have the fluid at a pump, he said. DEF should only be used for certain trucks that are 2007 models and newer and have a special blue valve. The truck Desch uses to tow does take DEF.

“Somebody had to call the tow truck because his car, is not working,” Francisco Espindola, a truck driver filling up at Chevron, said.

“If there’s not a selection of type of fuel, you’re at the wrong pump,” Desch said.

Over Labor Day weekend, it happened again to an unsuspecting college-aged girl heading back to school after a beach vacation.

The mother-daughter duo spent days waiting on the repairs in Beaumont.

“The repairs are still not finished, we had to leave our car in California, rent a car, drive my daughter back to school and drive home and we’re still waiting to see what the actual extent of the damage is going to be.”

The expenses are not covered by Chevron or their auto insurance. Scott said she wants to warn others not to make the same mistake.

“The other thing I would really like to urge the gas stations to do is to take more responsibility to make it clearer that this is a third product and that motorists definitely need to be more careful about using it.”

After our first story aired about DEF, Dom said he has seen less drivers get towed out of the station but it still happens about twice a month; tries to warn them himself if he can.

Scott said if the costs continue to add up, they’re going to pitch the car. Chevron did not respond to NBC Palm Springs’ request for comment on future warnings or signage at the gas station.