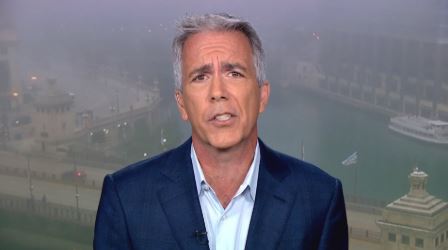 Former Illinois Rep. Joe Walsh said Monday his campaign will go straight to Republican voters in states where Republican parties canceled 2020 presidential primaries, saying the party has become a “cult” that “is all about washing their leaders’ feet every day.”

Walsh, along with Republican primary challengers former South Carolina Rep. Mark Sanford and former Massachusetts Gov. Bill Weld, criticized GOP leaders and President Donald Trump in a Washington Post op-ed on Friday on the heels of party leaders in Kansas, South Carolina and Nevada canceling their primaries in a show of support for Trump. When asked on CNN’s “New Day” on Monday how he plans to challenge it, Walsh said he is going to take his campaign straight to voters.

Walsh, who voted for Trump in the 2016 presidential election and is now outspoken against the Trump presidency, called Trump a “would-be dictator.”

“I always want to pinch myself and remind myself that this isn’t Russia. I do not live in Russia. I refuse to live in Russia,” Walsh said. “We can’t just cancel elections in this country. That’s what Donald Trump is doing. He’s literally canceling elections, and it’s very easy to be p***** off at Trump, but we’re used to this with Trump. He is a would-be dictator. He would like this to be Russia.”

Walsh also said on Monday he has “given up on the Republican Party,” calling it “a cult.”

“They no longer stand for ideas. The Republican Party right now is all about washing their leaders’ feet every day. That’s what they do.”

State Republicans or Democrats have decided in the past not to hold a presidential primary when an incumbent is running essentially uncontested. In South Carolina, Republicans decided to nix their presidential primaries in 1984 and 2004, when Ronald Reagan and George W. Bush were up for their second terms, while state Democrats skipped their contests in 1996 and 2012, with Bill Clinton and Barack Obama running for reelection. Trump has an 88% approval rating among Republicans, according to a recent CNN/SSRS Poll.