Elon Musk: Crew Dragon spacecraft for NASA could fly astronauts in 3 to 4 months 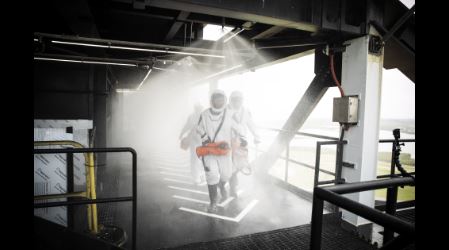 SpaceX’s Crew Dragon capsule could be ready to fly NASA astronauts in three to four months. It would mark the first time humans have launched to orbit from US soil in almost a decade.

CEO and chief engineer Elon Musk told CNN Business’ Rachel Crane that SpaceX is “going as fast as we can” to get the overdue spacecraft, which is designed to ferry astronauts to the International Space Station, ready for flight.

Jim Bridenstine, NASA’s administrator, said in an interview on Monday that he is not confident in that timeline. The space agency will likely have to purchase more seats aboard Russian-made spacecraft in 2020, he said, to ensure US astronauts have continued access to the space station because of ongoing dealys with its Commercial Crew program, he said. That program includes Crew Dragon and a Boeing-built capsule, Starliner, which is also years behind schedule.

NASA asked the private sector to develop crew-worthy spacecraft to replace the Space Shuttle program after it retired in 2011. SpaceX was given $2.6 billion and Boeing was awarded $4.2 billion in 2014. NASA originally predicted both companies’ spacecraft would be up and running by 2017.

SpaceX’s Crew Dragon capsule flew an uncrewed demonstration mission in March, during which it briefly docked with the ISS. The company was expected to launch astronauts in July, but the craft exploded earlier in the year during a ground test of its emergency abort system.

Musk told CNN Business that 95% of SpaceX’s resources are dedicated to its Dragon spacecraft and Falcon rockets, and the Crew Dragon vehicle that will conduct SpaceX’s first crewed mission will arrive at its Florida launch site in November.

Last week, Bridenstine chided Musk on Twitter for giving a presentation in Texas about SpaceX’s futuristic Mars rocket, Starship, while Crew Dragon is still on the ground.

“I am looking forward to the SpaceX announcement,” Bridenstine said on Twitter Friday. “In the meantime, Commercial Crew is years behind schedule. NASA expects to see the same level of enthusiasm focused on the investments of the American taxpayer. It’s time to deliver.”

During his interview with CNN Business, Musk responded: “Did he say Commercial Crew or SLS?” SLS, or Space Launch System, is a rocket designed for deep-space exploration that Boeing is building for NASA. The project has endured years of delays and billion-dollar cost overruns.

Bridenstine told CNN Business that he recognized “a lot of NASA contractors are behind schedule” and he wants to hold all of them accountable for delays.

Bridenstine also noted that NASA spends $85 million per seat to fly US astronauts on Russian spacecraft, and he called SpaceX out on Twitter because he wants to ensure NASA’s Commercial Crew partners are “focused on the right things.”

Bridenstine referred to Crew Dragon’s explosion as a “catastrophic failure,” and said one of the reasons he’s skeptical of the idea that Crew Dragon will be ready in the near future is because the updated emergency abort system “has not been qualified” and has not been tested.

Musk said over the weekend that a spacecraft with the new abort system would arrive in Florida in October so it can undergo final testing. That will include an in-flight test of its emergency abort system, which will see the Crew Dragon launch atop a rocket then break off from the rocket and conduct an emergency landing to simulate a situation in which a rocket misfires. NASA and SpaceX both have to deem the spacecraft ready before that test will be scheduled.

Boeing has yet to launch its uncrewed demo mission. A spokesperson did not immediately respond to a request for comment about when Starliner will reach the launch pad.

Bridentine said Boeing is experiencing “similar challenges” with testing the spacecraft and he expects its first flight is “months away.”

The space agency in July said dates for Boeing’s first missions were “under review.” A NASA spokesperson said the schedule will not be officially updated until NASA installs a new associate administrator for human spaceflight. Bill Gerstenmaier held that role for more than a decade before he was demoted two months ago.

Bridenstine said NASA has candidates in mind and will bring on an associate administrator “the coming weeks or months.”