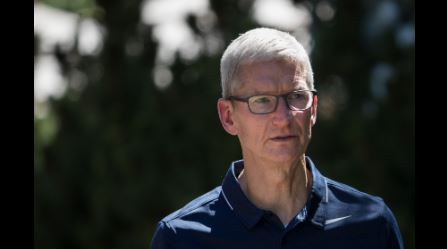 Apple is taking a public stand against the Trump administration’s position on one of America’s thorniest immigration issues.

In an unusually direct show of support for Dreamers from a major public company, Apple and CEO Tim Cook said undocumented immigrants who came to the United States as children have made an outsize contribution at Apple. The statement came in a “friend of the court” filing in cases pending at the US Supreme Court.

“We did not hire them out of kindness or charity,” Apple said in the court filing. “We did it because Dreamers embody Apple’s innovation strategy. They come from diverse backgrounds and display a wide range of skills and experiences that equip them to tackle problems from different perspectives.”

The Obama administration approved the Deferred Action for Childhood Arrivals, or DACA, program in 2012 after unsuccessful efforts in Congress to pass a measure that would allow children of undocumented immigrants brought into the country illegally to avoid deportation. In an executive action, the Trump administration rescinded DACA in September 2017. That faced several legal challenges and will soon be taken up by the Supreme Court.

In its filing, Apple relayed anecdotes about the lives and work of five Dreamers who work at Apple, all told anonymously because they “fear retribution.” One was identified in the document as D.O., who Apple said was brought by his mother to the United States from Mexico as an 8-year-old.

“I think the adversity I faced led me to develop a really strong work ethic that allowed me to succeed,” D.O. says in the court document. “I attended a college program where you could graduate with your bachelor’s in three years instead of four — but that meant no breaks, no summers off.”

Apple said Dreamers’ unique backgrounds bring tangible skills to the company that make it more successful. It also made a moral case for preserving DACA, arguing Dreamers came to our country as children through no fault of their own.

“Our country has enjoyed unparalleled success by welcoming people from around the world who seek to make a better life for themselves and their families, no matter their backgrounds,” the company said. “As a group, they tend to display levels of determination and resolve that would be the pride of any business. We could tell you 443 stories to illustrate these attributes.”

Immigrants help drive the vitality of the American labor force. And President Donald Trump’s attempts to crack down on immigration have drawn strong criticism from many quarters of the business community.

In January 2018, after Trump moved to rescind DACA, executives from more than 100 companies — Apple among them — cosigned a letter calling on Congress to save the program.

In 2017, the first year of Trump’s presidency, Trump’s ban on travel to the United States targeting primarily mostly Muslim-majority countries alienated many business leaders. At that time, Cook also issued a letter saying Apple did not support the policy and would support employees from those countries.

“Apple would not exist without immigration,” he said in the 2017 letter.