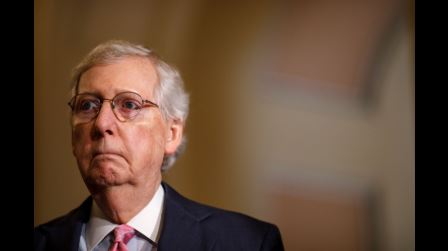 In a new campaign video on Facebook, Senate Majority Mitch McConnell pitches himself as the man who can end the House’s impeachment inquiry, a sign of how the chief Republican in the chamber might handle an impeachment trial should the House pass articles charging President Donald Trump with crimes.

“Nancy Pelosi is in the clutches of a left-wing mob,” McConnell says directly to a camera. “They’ve finally convinced her to impeach the President. All of you know your Constitution. The way that impeachment stops is a Senate majority, with me as majority leader.”

“But I need your help,” he adds. “Please contribute before the deadline.”

On September 25, a day after Pelosi’s announcement, McConnell said Senate Republicans “support the established proper procedures” for considering a whistleblower’s complaint at the center of the House’s investigation. McConnell told Politico that the Democrats had “already overplayed their hand” and there was “no quid pro quo” between Trump and Zelensky, according to a White House’s summary of the call. Democrats countered that Trump had held up nearly $400 million in U.S. aid to Ukraine not long before asking the Ukrainian leader to work with his personal attorney Rudy Giuliani on the probe into the Bidens, even though he did not explicitly mention the aid on the call. There is no evidence of wrongdoing by either Joe or Hunter Biden.

That same day, the McConnell campaign account unveiled Facebook ads on the topic that consumed Washington, according to Facebook’s ad library. “Pelosi is obsessed with impeaching President Trump,” said one ad. “And your conservative Senate Majority is the ONLY THING standing in her way.” A couple days later, McConnell’s video was attached to the ads.

The Democratic-controlled House needs only a simple majority to pass articles of impeachment, while two-thirds of the Senate is required to convict and remove the President from office — an unlikely scenario given its Republican majority.

On September 30, McConnell said on CNBC that he “would have no choice but to” take up articles of impeachment, according to the chamber’s rules. “How long you’re on it is a whole different matter,” McConnell added.

During that chaotic week, from September 25 to October 1, McConnell’s official campaign account spent nearly $60,000, almost 43% of its spending on Facebook in the past year and a half, according to Facebook’s Ad Library report.

Michael Duncan, a McConnell digital campaign consultant, told CNN that he’s been impressed by the return on impeachment-focused advertising.

“Clearly the issue of impeachment has excited our base across the Republican Party,” said Duncan.

In September, McConnell’s pre-impeachment Facebook ads focused on the majority leader’s most enduring accomplishments: confirming scores of conservative judges and pushing through two Supreme Court justices — Neil Gorsuch and Brett Kavanaugh — during the Trump presidency. Many of the ads touted a new “I stand with Kavanaugh” bumper sticker.

“No issue has motivated Republicans donors like this since Kavanaugh,” Duncan said.

Other Republicans campaigns have also seen a surge in fundraising. WinRed, a new GOP donor platform created to counter the Democrats’ ActBlue, claimed to have raised over $13.7 million in the six days since Pelosi’s impeachment announcement, a large part of its $30 million-plus haul in the past three months.

But Democrats have been encouraged by polling that shows a boost in support for impeachment.

“At the end of a reporting quarter, I am normally focused on making sure we have the resources we need to build an operation to fight for the things Kentuckians care about: health care, the cost of prescription drugs, jobs, and education,” said McGrath in a fundraising email sent on Sunday. “But, the events of this past week are a glaring reminder that this campaign isn’t all about policy, or even politics. It’s also about our country, our institutions, and our very democracy.”

“This week’s events underscore how important it is to defeat Mitch McConnell and restore democracy,” she added.