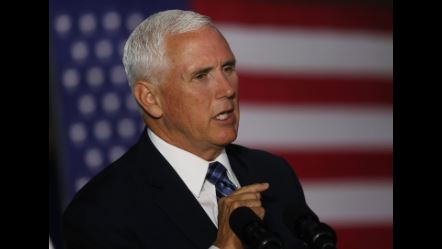 House Democrats are seeking documents from Vice President Mike Pence as part of their impeachment investigation into President Donald Trump and his conversation with the President of Ukraine.

The request for documents to Pence adds the vice president to a growing list of Trump officials and allies from who Democrats are seeking documents as part of the impeachment inquiry.

The three panels leading the probe have issued subpoenas to Secretary of State Mike Pence and the President’s lawyer Rudy Giuliani. They’re also threatening to issue a subpoena on Friday to the White House if it does not turn over documents related to Ukraine.

A subpoena could also be looming for Pence if he does not voluntarily provide documents.

Rather than traveling to Warsaw, Poland, last month to meet with Ukrainian President Volodymyr Zelensky, Trump decided to stay home to track the damage from Hurricane Dorian. In his place he sent Pence, whose face-to-face meeting with Zelensky now puts him at the heart of events that led to the impeachment inquiry by the House of Representatives.

The Democratic impeachment investigation stems from the whistleblower complaint alleging Trump sought help from Ukraine’s government to dig up dirt on his political rival and the White House tried to cover it up.

House Democrats have set an aggressive schedule of depositions to go along with their document requests as they have prepared to potentially file articles of impeachment related to Ukraine, putting the other matters they were investigating involving the President — from Russian election interference to the Emoluments clause of the Constitution — to the side.

The vice president’s spokesman said that the Democrats letter “does not appear to be a serious request.”

“Given the scope, it does not appear to be a serious request but just another attempt by the Do Nothing Democrats to call attention to their partisan impeachment,” Pence spokeswoman Katie Waldman said in a statement. “Despite their efforts to distract and obstruct our agenda, this Administration will stay focused on creating jobs, securing the border, rebuilding our military, negotiating better trade deals, and the issues most important to the American people.”

The Trump administration has signaled it does not intend to cooperate with the House investigation on Ukraine, just as it has stonewalled previous requests related to allegations of obstruction of justice and efforts to obtain the President’s tax returns and other financial documents. Pompeo wrote in a letter this week that he would try to block State Department officials from testifying, calling the schedule unfeasible, and it was unclear whether he would comply with a subpoena that had a Friday deadline.

Trump said Friday that he would be issuing a letter to House Speaker Nancy Pelosi in response to the Democrats’ request for documents. White House lawyers were drafting the letter saying they could not be compelled to produce documents until the full House votes to open an impeachment inquiry, something Pelosi has said is unnecessary according House rules.

Previously, Democrats have responded to White House stonewalling with contempt votes and lawsuits to pry loose the materials they were seeking. But they now appear to be taking a different tack with the Ukraine inquiry: arguing that a failure to cooperate will make their case that obstruction of justice occurred.

“We don’t want this to drag on months and months and months, which appears to be the Administration’s strategy, so they just need to know that even as they try to undermine our ability to find the facts around the President’s effort to coerce a foreign leader to create dirt that he can use against the political opponent, that they will be strengthening the case on obstruction if they behave that way,” Schiff said at a newsconference this week.

But the Democrats have had successes in obtaining information, too, including the testimony from former US special envoy to Ukraine Kurt Volker and text messages Volker provided showing that Trump’s push for an investigation was linked to Ukraine’s efforts to obtain a face-to-face meeting between the two presidents.

Pence was told about the July 25 call between Trump and Zelensky a day after it occurred, sources told CNN, although they would not say whether the vice president was briefed about what Trump said about the Bidens.