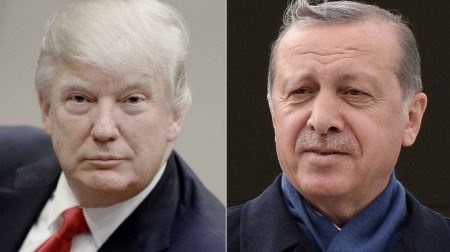 President Donald Trump threatened to “obliterate” Turkey’s economy if the country does anything he considers to be off limits pertaining to ISIS, as the country prepares to execute an operation without US support in northern Syria.

“As I have stated strongly before, and just to reiterate, if Turkey does anything that I, in my great and unmatched wisdom, consider to be off limits, I will totally destroy and obliterate the Economy of Turkey (I’ve done before!),” the President tweeted Monday morning. “They must, with Europe and others, watch over the captured ISIS fighters and families. The US has done far more than anyone could have ever expected, including the capture of 100% of the ISIS Caliphate.”

The threat comes after the White House released a readout of a call with Turkish President Recep Tayyip Erdogan. According to the White House, the two discussed the execution of a long-planned operation in Northern Syria which will not be supported by US Armed Forces, and the White House announced that the US would delegate the responsibility of ISIS fighters captured in the last two years to Turkey.

The move marks a major shift in US foreign policy and effectively gives Turkey the green light to attack US-backed Kurdish forces. The group, long considered as among Washington’s most reliable partners in Syria, has played a key strategic role in the campaign against ISIS in the region.

The Defense Department made it clear in a statement Tuesday that the Pentagon does not endorse the Turkish operation in Northern Syria and the US will not be involved in the operation.

The decision to have the US relinquish responsibility in Syria was swiftly criticized by many lawmakers on Capitol Hill, including South Carolina Republican Sen. Lindsey Graham — a key Trump ally.

Trump defended his decision to move aside US forces in northern Syria in advance of the Turkish military operation, writing on Twitter that “it is time for us to get out of these ridiculous Endless Wars, many of them tribal, and bring our soldiers home.”

“WE WILL FIGHT WHERE IT IS TO OUR BENEFIT, AND ONLY FIGHT TO WIN,” the President continued. “Turkey, Europe, Syria, Iran, Iraq, Russia and the Kurds will now have to figure the situation out, and what they want to do with the captured ISIS fighters in their “neighborhood.” They all hate ISIS, have been enemies for years. We are 7000 miles away and will crush ISIS again if they come anywhere near us!”