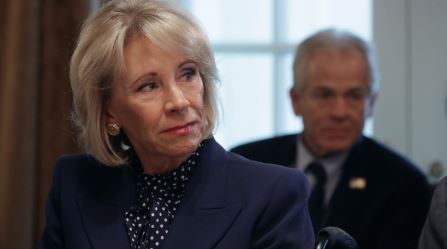 Education Secretary Betsy DeVos violated a court order to stop collecting on the debts of some former Corinthian College students and now a judge is weighing sanctions or finding her in contempt of court.

“I feel like there have to be some consequences for the violation of my order 16,000 times,” said US Magistrate Judge Sallie Kim at a hearing held Monday in San Francisco, according to an audio recording released by the court.

The Department of Education has said that more than 16,000 borrowers were incorrectly informed that they owed a payment on their debt, according to a September court filing. About 1,800 had their wages garnished and more than 800 were mistakenly subject to adverse credit reporting.

“Whether it’s contempt or whether it’s sanctions, I’m going to entertain them,” Kim said.

“I’m not sending anyone to jail yet, but it’s good to know I have that ability.”

The judge’s comments were first reported by Bloomberg. Both the Department of Education and the plaintiffs will have a chance to formally respond before the judge makes a ruling.

The plaintiffs, who are represented by lawyers at the Project on Predatory Student Lending and Housing and Economic Rights Advocate, argue that the borrowers are entitled to debt relief under an Obama-era rule. The now defunct, for-profit Corinthian College shut down after it was fined by the government in 2015 for misleading prospective students with inflated job placement numbers

At the hearing, attorney Charlie Merritt told the judge that the Department of Education shared her concerns and “takes responsibility” for the problems.

“The department was surprised to learn the extent of the noncompliance issues once it kind of dug into this issue further,” Merritt said.

In its September court filing, the Department of Education said it was taking several steps to address the issue, including posting information about the mistakes on its website, notifying impacted borrowers on a rolling basis and issuing refunds.

But the judge suggested Monday that these steps were insufficient.

“Sending a couple of emails seems really minor in terms of making sure there is compliance with an order of this magnitude. I’m astounded really, just really astounded,” she added.

But she said she doesn’t want to divert resources away from the department as it tries to correct the problem.

“I’m most concerned with helping the people that were harmed by this, this problem that the government created,” Kim said.

When Corinthian College folded in 2015, it left thousands of students without a degree and saddled with student debt. The Obama administration told impacted borrowers that they would receive debt relief.

But under the Trump administration, the department attempted to change the way it calculated how much of a borrower’s debt would be forgiven. The Project on Predatory Student Lending and Housing and Economic Rights Advocate filed its case in 2017 and the judge granted a preliminary injunction in May 2018, ordering the department to stop collecting on the debts.

“While we do not comment on ongoing litigation, we are working to faithfully comply with the judge’s orders in this case,” Department of Education spokeswoman Angela Morabito said Wednesday.