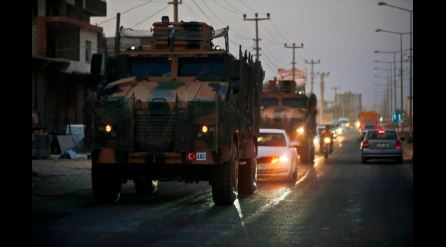 Turkish artillery fire comes close to US forces in Syria

Turkish artillery hit close to a US special operations unit near the Syrian city of Kobani on Friday, according to a US official familiar with the initial assessment.

The artillery shells hit several hundred yards from where the US forces were located. There are no American injuries in the early reports and at this time no indication this was deliberate, the official said. Newsweek was first to report on the incident.

Turkey has denied its forces fired on the US troops.

A senior US defense official said one round hit near an outpost location where US troops were located. The US forces then moved to a nearby local headquarters where a larger group of forces were located.

The official also said that right after the explosion, US jets patrolled the area to try to determine where the launch came from and concluded it most likely was an artillery round . The official said that still needs to be confirmed.

A second US official confirmed that there was an explosion “in the vicinity” of US forces, but said the US government had not yet verified the origin of the explosion.

“We are aware of the explosion. We know right now that no US service members have been injured,” the second US official told CNN, adding that “we don’t know for sure from whom it came, and we don’t have verification from where right now.”

The official added that the US forces were at an outpost “near Kobani” at the time of the explosion.

‘This was not a mistake’

A third official said that “there has been no activity since the explosion and we have no indication that there was any intentional fire on US forces.”

A former senior Trump administration official disagreed. “This was not a mistake,” tweeted Brett McGurk, the former presidential envoy to the global coalition to counter ISIL. “Turkish forces have fired on a declared US military outpost in northern Syria. Turkey knows all of our locations down to the precise grid coordinate as confirmed by” Defense Secretary Mark Esper and the chairman of the Joint Chiefs of Staff, Gen. Mark Milley “only two hours ago,” McGurk said.

“With each day this Turkish attack continues, the risks increase for American personnel and our ability to get out safely at all becomes gravely jeopardized,” McGurk continued. “Either [President Donald] Trump changes course rapidly and clearly (ASAP) or else it is necessary to plan a safe exit.”

Earlier on Friday, Milley told reporters at the Pentagon that “the Turkish military is fully aware down to explicit grid coordinate detail of the locations of US forces,” later adding “we retain the right of self-defense.”

At that same news conference, Esper stressed that the US will remain focused on the safety of its men and women in uniform and “as such we are repositioning additional forces in the region to assist with force protection as necessary.”

A US defense official also told CNN earlier Friday that the US has shared a list of “no-strike” locations with the government of Turkey, which goes beyond just where US troops are located and includes Kurdish areas, including Syrian Democratic Forces-controlled prisons holding ISIS prisoners that the US sees as necessary to the fight against the terrorist group.

Turkey’s Ministry of Defense issued a statement late Friday night denying that its forces fired on US troops and said instead that its forces were attacked from a position a thousand meters away from the US post.

“Turkish border outposts south of Suruç came under Dochka and mortar fire from the hills located approximately 1,000 meters southwest of a U.S. observation post. In self-defense, reciprocal fire was opened on the terrorist positions of the attack,” the Ministry wrote.

The Defense Ministry added that Turkey “did not open fire at the U.S. observation post in any way” and that “all precautions were taken prior to opening fire in order to prevent any harm to the US base.”

Turkish forces, however, “ceased fire upon receiving information from the US,” the Ministry said, adding that: “We firmly reject the claim that US or Coalition forces were fired upon.”

The senior US defense official confirmed that the Turks ceased firing when they learned the nearby troops were Americans.

A resident of Kobani told CNN that he witnessed the artillery shelling.

Alaa Sadoun, a journalist living in Kobani, said the shelling hit a small strategic hill near Kobani called Mashta Nour, where locals believe the US Forces were present. After the strike, a military vehicle left the area, Sadoun said.

US forces are known to have small units stationed at small outposts at varying locations along the Syria-Turkey border.