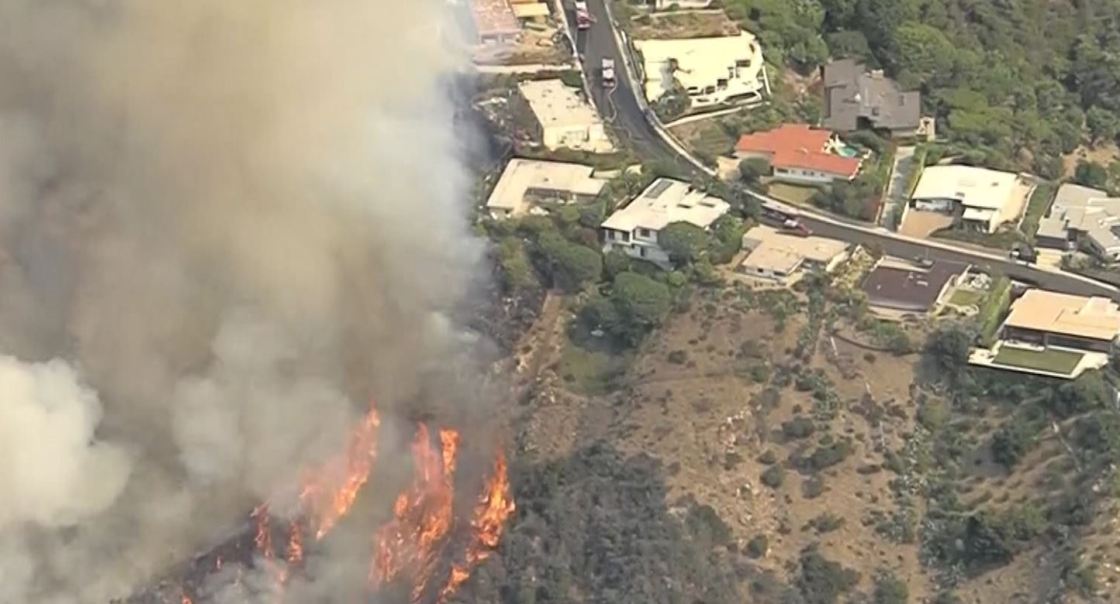 Flames raced up a Pacific Palisades hillside Monday, chewing through trees and brush as the fire marched toward multimillion- dollar homes, forcing the precautionary evacuation of about 200 homes.

The fire was reported about 10:40 a.m. near the 500 block of North Palisades Drive, with the flames driven upward by the terrain, according to the Los Angeles Fire Department. Authorities said there was no wind in the area, even as gusty conditions persisted in other parts of the Southland.

By early afternoon, the flame was estimated at 30 acres, and no structures had been damaged. Although no injuries were officially reported, Spectrum News 1 caught video of a female inmate firefighter being treated and loaded into an ambulance after being overcome with heat exhaustion.

Some homeowners could be seen using garden hoses in an effort to beat back flames nearing their backyards, but they were clearly outmatched by the towering fire, which threatened homes along Vista Grande Drive and Charmel Lane. As the flames advanced rapidly, some residents were seen running down their driveways, giving way to arriving structure-protection fire crews.

Early Monday afternoon, mandatory evacuation orders were issued for an area between Charmel Lane and Bienveneda Avenue, from Lachman Lane on the north to Merivale Lane on the south. An evacuation center was established at the Palisades Recreation Center, 851 Alma Real Drive.

Officials said the evacuations were ordered due to both fire and smoke potential in the area.

Even without wind, embers floating into the neighborhood from the flames below set off at least one fire in shrubs separating a pair of homes, and firefighters rushed into the area to douse the flames before any structures were damaged.

“This is an extremely challenging fire for hand crews,” Weireter said. “If you look at the firefighters, they’re essentially clawing their way up this hillside with rocks coming down on them.”

There was no immediate word on a possible cause of the fire, Weireter said. He said it was not known if the fire originated at a homeless encampment.

“We do not have a cause, and while that subject comes up a lot, I don’t have a cause for it right now,” Weireter said. “We have arson investigators on scene, looking to see what the cause and the point of origin is.”

He said the blaze started at the base of Palisades Drive and burned through about 18 acres within 15 minutes.

“The main message for the public is to kind of stay out of this area,” Weireter said. “We will have an evacuation center set up at the Palisades Recreation Center, and if you need information, we will also have a public information officer there.”

Weireter said firefighters were concerned about the forecast for high winds later this week.

“The forecast is going to be (for) increased winds by Thursday,” Weireter said. “That’s why we’re going to put a lot of resources on it to make sure this fire is wind-tested, because the winds will be coming back on Thursday.”