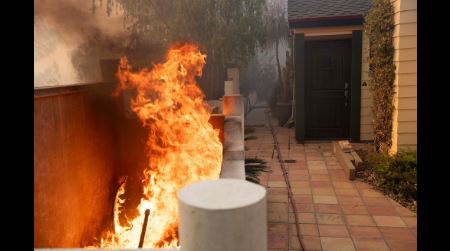 As public works crews cleaned up a rural Southern California area after the Tick Fire, they noticed something strange sticking out from the ashes.

It was a human skull.

By late Sunday, the Tick Fire had burned through about 4,615 acres and was 70% contained. Investigators were called to a stretch of Sand Canyon Road in Santa Clarita, where they found human remains believed to be about a year old, the Los Angeles County Sheriff’s Department said.

“We believe that it was concealed in brush and then the fire burned away the concealment and it’s led to the discovery,” Lt. Derrick Alfred told CNN affiliate KCAL.

There are no houses nearby, the roads wind around mountains and hills are steep.

So authorities have launched an investigation.

“It’s definitely suspicious just on the location alone,” Alfred told the affiliate. “I mean, it’s not a common place where a person may fall ill and die.”

Clues — like clothes and any kind of identification — were likely burned in the fire, the news station reported, citing officials.

The Tick Fire had destroyed 24 residences and damaged another 36 by Sunday evening, the Los Angeles County Fire Department said.