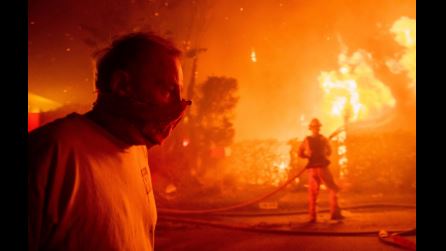 Firefighters are trying to contain a wildfire that raced into part of San Bernardino and engulfed a few homes overnight, and officials are urging more than 1,000 people to stay away while the battle goes on Thursday morning.

The Hillside Fire — which started sometime after midnight in the hills above San Bernardino — quickly consumed about 200 acres, officials said, and is one of at least 10 active wildfires in a state plagued by them in recent weeks.

Strong winds Thursday threaten to stoke the flames further. With gusts stronger than 50 mph expected in some areas, more than 17 million people in Southern California are under red flag warnings — meaning wind, humidity and other conditions are ripe for fires.

Authorities rushed to alert residents as the flames swept into some neighborhoods overnight, stunning residents who’d been sleeping. No injuries have been reported.

Julien Cooper, 53, and his father were sleeping in Cooper’s San Bernardino home when he heard his phone ringing. He woke up and smelled smoke.

“Ten seconds later, I hear the doorbell and I already know what it is since we had a fire a week ago,” he told CNN. “It was the neighbor saying that there was a fire in the field.”

Cooper grabbed his dad and his dog, crossed the street to help the neighbor’s elderly mother evacuate and met up with a relative at a McDonald’s. Minutes later he returned home and grabbed some valuables — and his neighbor’s home was on fire.

Cooper took video of the neighbor’s house engulfed in flames. His nephew Henri Moser, who lives in Maine, shared it on Twitter. Cooper said he heard firefighters say they’d try to save his house, which had barely survived a wildfire 39 years earlier.

By mid-morning Thursday, firefighters had stopped the flames in at least one neighborhood where a home burned to the foundation, video from CNN affiliate KTLA showed. But fire was burning elsewhere near the city.

“This fire moves so fast that it’s imperative that people ‘evacuate when we ask them to,” San Bernardino County Fire Deputy Chief Kathleen Opliger said.

Evacuations have been ordered for about 490 homes in northern San Bernardino, accounting for about 1,300 people, the county fire department said. Hundreds of firefighters were there, trying to contain the flames, San Bernardino County Fire Department spokesman Chris Prater said.

The fire was a few miles away from Cal State San Bernardino, which was closed Thursday because the regional utility intentionally cut power as a precaution, hoping to prevent fires in the red-flag conditions. The campus lost power at 3:20 a.m. Thursday.

Fires in the Los Angeles area

Thursday’s winds will be of no help to Los Angeles-area firefighters, who are battling several blazes.

The Getty Fire in Los Angeles, which began Monday, is threatening more than 7,000 homes, the Los Angeles Fire Department said. Most evacuations have been lifted, and the blaze is 39% contained.

And about 40 miles northwest of the city, the Easy Fire broke out in Simi Valley Wednesday. Wind gusts of hurricane force — at least 74 mph — were reported at a weather station about seven miles north of Simi Valley.

Those evacuations included the Ronald Reagan Presidential Library, where the former President and his wife, Nancy, are buried. The facility appeared safe by Wednesday evening after firefighters responded.

The state has secured grants from the Federal Emergency Management Agency to help fight several fires, including the Easy Fire and the blazes in San Bernadino and Riverside County, the governor’s office said. The grants allow affected local and state and agencies to apply for a 75% reimbursement of eligible fire suppression costs.

Power companies may be responsible for fires

The Simi Valley wildfire started near a Southern California Edison sub-transmission line, the power company said, adding that it has filed a report with the state Public Utilities Commission.

“SCE is conducting a review into the circumstances surrounding the fire, and will cooperate with all investigations into the origin and cause of the fire,” the company said in a statement.

The company said Tuesday that its equipment likely also contributed to the Woolsey Fire last November. The fire became one of the most destructive in the state, according to the California Department of Forestry & Fire Protection, killing three people and destroying more than 1,600 structures.

In Northern California, Pacific Gas & Electric (PG&E) filed three reports with the California Public Utility Commission Wednesday indicating that its equipment may be involved in the start of three fires, according to officials.

Bill Johnson, CEO and President of PG&E Corp., told media the company has contacted the state about reports of videos possibly showing sparking powerlines at the Bethel Island and Oakley fires.

A third report was then filed linking its equipment to a fire in Milpitas, California.

“Troublemen observed wire down. They observed two houses, two cars, and a shed damaged by the fire. An on-site Milpitas Fire Department Investigator informed the troubleman that he was looking at the downed wire as a potential ignition source and collected a portion of the conductor into evidence,” PG&E said in a statement to CNN.

PG&E has been under scrutiny in recent years for the role its equipment played in several devastating fires across the state, including last year’s deadly Camp Fire, which killed 85 people. Over the last weeks, the utility has been enacting preventative shutoffs all over northern and central California.

North of the San Francisco Bay, the week-old Kincade Fire — the state’s largest active wildfire — has destroyed nearly 77,000 acres across Sonoma County and more than 260 structures, including more than 130 single-family homes, officials said.

It was about 60% contained as of Thursday morning. At the Sonoma County Airport, several airlines have canceled all flights for Thursday.

The Kincade Fire started October 23, but the cause is still under investigation.

The good news: Forecasters say winds in Northern California will weaken through Thursday, and more residents can go home.