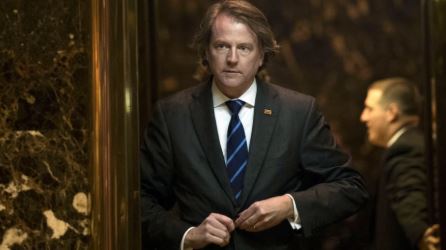 A federal judge in Washington expressed disbelief that the White House could control what its former officials might talk about, when they’re subpoenaed by the House of Representatives or otherwise.

“We don’t live in a world where your status as a former executive branch official somehow shields you or prevents you from giving information,” Judge Ketanji Brown Jackson said Thursday during a nearly four-hour hearing to a Justice Department attorney who was defending the White House.

The lawsuit is over whether former White House counsel Don McGahn must appear for testimony in the House. Democrats issued the subpoena in April, though he ignored their demands and didn’t show up.

“I see almost every day people who are former executive branch officials giving information to the media. People are out there talking, people are saying things,” Jackson said, taking a legally complicated separation-of-powers topic and injecting the real world into it.

The Justice Department’s attorney, James Burnham, countered that the House sued because it only needs McGahn to speak about his capacity as an official in his time working in the White House. President Donald Trump still would have the ability to claim executive privilege over McGahn’s work for him, Burnham said.

“The President doesn’t own it in respect to the people who are talking on MSNBC all the time?” Jackson asked.

The proceedings unfolding in Jackson’s courtroom relate to one subpoena to one witness — McGahn. But her eventual ruling could play a pivotal rule for future witnesses in the impeachment inquiry, as more Trump administration officials are subpoenaed for depositions in the House and could be called to testify at the Senate trial.

The White House had claimed McGahn has “absolute immunity” from being forced to speak to Congress. The House subpoenaed him in April, saying they need to question him about whether the President attempted to obstruct the Russia investigation and as they consider impeaching Trump, making new laws and conducting oversight of the executive branch.

“The House is suing Don McGahn. He’s a private person out in the world,” Jackson added.

Megan Barbero, a lawyer representing the House, is arguing that that the House needs McGahn to testify so that the House can test his credibility, ask him questions and “have a live witness.” It’s “what the Constitution empowers the committee to do,” she said.

Doug Letter, the House of Representatives’ top lawyer, reacted to the Justice Department arguments, saying “This is what they wish the law were. It is not what the law is.”

“Apparently, the Trump administration wishes this were different,” Letter said. “They would like a different Constitution than the one we have.”

After Letter mentioned the ongoing House impeachment inquiry, the judge pointed out the House brought this lawsuit before “the recognition of a formal impeachment inquiry.” Letter said that even though the subpoena was issued in April, lawmakers were “trying to get McGahn to testify now.”

He also mentioned a resolution that the House Judiciary Committee passed in September about how that committee would handle impeachment. But that resolution came before the Ukraine scandal burst into public view, and before Thursday’s vote by the full House officially setting the rules for the inquiry.

The judge didn’t say exactly when she would issue a ruling, the timing of which could have a domino effect on other witnesses in the fast-moving impeachment inquiry. If the parties want to expedite her decision, Jackson said she is open to ruling from the bench, with a written opinion to follow, but the parties would need to make a formal request.

Role of the courts

Jackson repeatedly suggested the federal courts have a role to play in the ongoing fights between the House of Representatives and the White House during impeachment proceedings — pushing back against the Trump administration’s position.

The hearing over dug into core questions about the checks and balances that underpin the American government, on a day when the House has decided to approve an impeachment inquiry of the President. Some courts in the past have attempted to stay out of fights between the other two branches of government, and a Justice Department attorney argued Thursday that the judge should follow that model. But Jackson said she believed courts could referee these disputes.

Jackson took issue with the Justice Department’s argument that the House has “political tools” it could use to resolve this dispute. She asked hypothetically if the House would seek to arrest McGahn and said they might contemplate “sending the sergeant-at-arms to arrest Mr. McGahn.”

She also expressed disbelief over arguments from the Justice Department that the courts shouldn’t play a role in these types of disputes between the more political branches of government, the Executive Branch and Congress. Burnham, the Justice Department attorney, said it didn’t happen “for 200 years” of US history.

Jackson pointed out, nearly yelling with frustration at Burnham, that the Constitution always allowed for these sorts of disputes to be settled in the courts, even if it hasn’t happened that often.

“What I don’t understand … is this notion that the judiciary can’t play its traditional role in deciding what the law is between these other branches,” Jackson said, later adding, “the Constitution itself sets the system in that way.”