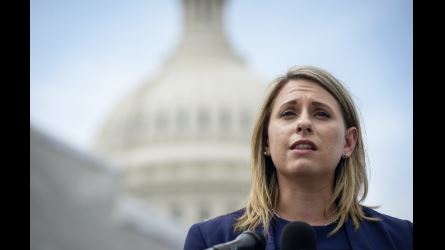 Katie Hill ‘leaving now because of a double standard,’ she says in final House floor remarks

Democratic Rep. Katie Hill of California, who announced her plans to resign from her congressional seat earlier this week, gave her final speech on the floor of the House of Representatives on Thursday, where she apologized to her supporters but said the forces that led her to leave Congress are larger than she is.

Earlier this month, a conservative blog released intimate photos of Hill alleging she and her husband had a separate relationship with an unnamed female campaign staffer. That report included three photos of the congresswoman, including an explicit photo.

“I am leaving because of a misogynist culture that gleefully consumed my naked pictures,” Hill said Thursday, additionally calling out President Donald Trump for his treatment of women with no apparent consequence for his alleged actions.

“The forces of revenge by a bitter jealous man, cyber exploitation and sexual shaming that target our gender and a large segment of society that fears and hates powerful women have combined to push a young woman out of power and say that she doesn’t belong here,” Hill said.

She continued, “yet a man who brags about his sexual predation, who has had dozens of women come forward to accuse him of sexual assault, who pushes policies that are uniquely harmful to women and who fills the courts with judges who proudly rule to deprive women of the most fundamental right to control of their own bodies, sits in the highest office of the land.”

At least 16 women have come forward with a range of accusations against Trump, ranging from sexual harassment and assault to lewd behavior, from before he was President. Most of the accusations against Trump came during the 2016 campaign when a 2005 “Access Hollywood” video surfaced that showed him saying he was able to grab women “by the p**sy” because he was famous.

He apologized and dismissed his remarks on the “Access Hollywood” video as nothing more than “locker room” talk. Trump also vehemently denied all of the women’s allegations made against him.

Hill noted that her remarks came after her final vote on the House floor, voting to formalize the parameters surrounding the next steps for the Democratic-led impeachment investigation into Trump.

“Today as my final act, I voted to move forward with the impeachment of Donald Trump on behalf of the women of the United States of America,” Hill said.

An apology to her supporters

As she’s done in her previous statements, Hill also acknowledged “the mistakes I made” and said the coverage of the photos pushed her “to the darkest places a mind can go and I’ve shed more tears that I thought were possible.”

“‘I’ve hidden from the world because I’m terrified of facing the people that I let down, but I made it through because the people who love me most dragged me back into the light,” Hill said.

Hill said she came to Washington to “give a voice to the unheard in the halls of power” and she apologized for where she fell short.

“I wanted to show young people, queer people, working people, imperfect people that they belong here because this is the people’s House. I fell short of that and I’m sorry. To every young person who saw themselves and their dreams reflected in me, I’m sorry.”

She continued, “To those who felt like I gave them hope in one of the darkest times in our nation’s history, I’m sorry. To my family, my friends, my staff, my colleagues, my mentors, to everyone who has supported and believed in me, I’m sorry.”

Hill did, however, admit to having a relationship with a campaign staffer before taking office, a relationship for which she apologized in a statement to her supporters last week.

Hill has claimed that her husband of nine years — Kenny Heslep, with whom she is currently in divorce proceedings — worked with right-wing media to publish intimate photographs of her to humiliate her. CNN has reached out to Hill’s husband for comment but has not heard back, and Hill has offered no evidence linking her husband to the distribution of the photos.

“Regardless of any errors in judgment that anyone may have made, it’s shameful that she’s been exposed to public humiliation by cyber exploitation,” Pelosi said Thursday in a news conference before Hill’s remarks, adding, “countless women across Americans have been subjected to this type of harassment and abuse, which is a profound violation of those women’s rights.”