Guatemalan boy who died in federal custody was on the floor for hours before anyone found him, video shows 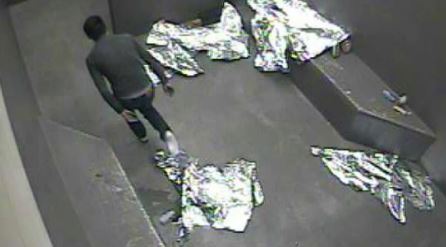 A sick Guatemalan boy who died in government custody was lying on the floor for hours before someone found him dead, a video first obtained by ProPublica shows.

The boy, identified by a US Customs and Border Protection official as Carlos Gregorio Hernandez Vasquez, 16, died on May 20 at a Border Patrol station in Weslaco, Texas, days after he crossed into the US and was apprehended by immigration officials, CBP said.

Surveillance video of a holding cell at the Weslaco facility first obtained by ProPublica and published on Thursday show the last moments of the boy’s life. ProPublica analyzed the video and compared it with police and emergency services records to create a timeline. CNN later obtained a copy of the video.

The boy was waiting to be transferred to the custody of the Health and Human Services Department, as is customary for unaccompanied minors, when he was diagnosed with the flu and taken to the Weslaco facility, the CBP official said.

In the video, Carlos first appears walking inside a cell in the Weslaco facility, wearing blue jeans, a dark long-sleeve shirt and a disposable white mask. He lays down on a cement bench as another boy, who was not identified, is sleeping under a Mylar blanket on a bench across from him.

The teen shifts around on the bench and moves out of the camera’s view for some time before he can be seen again as he collapses, face down on the ground.

Carlos stays mostly still on the floor for about 10 minutes, based on ProPublica’s analysis of the footage.

He gets up, walks to the toilet and appears to collapse soon after. He is moving and bending his legs for a few minutes until he stretches them out and stops moving. Only Carlos’ legs, an arm and part of his torso are visible in the video. The rest of his body is blocked by a privacy wall on the toilet area.

The video abruptly ends and restarts about four hours later, ProPublica’s analysis found, and shows Carlos in the same position as his cellmate wakes up, finds him in the toilet area and flags a Border Patrol agent.

The Weslaco Police Department, the agency that provided the video to ProPublica and briefly investigated the boy’s death, said the footage was turned over to their investigators, split in two parts, according to the media outlet.

CBP had previously said in a statement that agents at the Weslaco station found Carlos unresponsive during a welfare check.

But Border Patrol logs obtained by ProPublica indicate that three welfare checks were done on Carlos over the period in which the video suggests the boy laid on the floor. The logs do not indicate how those checks were done or note that anything was amiss.

CNN has not independently obtained the Border Patrol logs.

When asked about the video, a CBP spokesperson said the investigation into Carlos’ death was ongoing.

“While we cannot discuss specific information or details of this investigation, we can tell you that the Department of Homeland Security and this agency are looking into all aspects of this case to ensure all procedures were followed,” the spokesperson said.

CNN reached out to the Hidalgo County coroner’s office but did receive an immediate reply. ProPublica said the autopsy listed the cause of death as flu respiratory infection, complicated by bronchopneumonia, sepsis and an immune system disorder.

“It hit me hard, that he was in the cell sleeping,” Sanders told CNN in an exclusive interview, recalling watching video and viewing still pictures of the incident after the boy died.

At least four other children are known to have died after journeying to the US from Guatemala and being apprehended by US authorities this year.

Earlier this year, immigration authorities ordered an increase of medical checks for children in their custody, with a focus on children under 10, amid an uptick of migrants crossing the US-Mexico border.