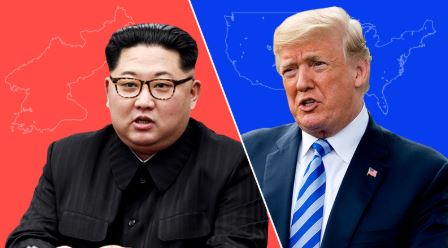 A senior North Korean official has called US President Donald Trump a “heedless and erratic old man,” the latest insult in an escalating war of words between the two countries.

Kim Yong Chol, Chairman of the Korea Asia-Pacific Peace Committee, made the comment about Trump on Monday in a statement reported by the state-run Korean Central News Agency (KCNA).

It comes a day after Trump warned that the North Korean leader Kim Jong Un could “void” their “special relationship” following reports that the hermit nation conducted an “important” test at a missile site.

On Monday, North Korean officials hit back at Trump. Ri Su Yong, the Vice-Chairman of the Central Committee of the Workers’ Party of Korea, warned the President to “think twice if he does not want to see bigger catastrophic consequences.”

According to a statement from KCNA, Ri said that Trump appeared “very anxious” to know what North Korea was thinking, and that Trump’s recent remarks were a sign “that he feels fear inside.”

“Trump would be well advised to quit abusive language which may further offend the Chairman,” Ri added.

The verbal slinging match is the latest dip in Washington and Pyongyang’s roller coaster relationship. Trump first derided the North Korean leader as “little rocket man” during a 2017 United Nations address — a nickname he has often repeated.

KCNA reported Saturday that a “very important test took place at the Sohae Satellite launching ground” which produced a “successful result” that was of “great significance” and would “change the strategic position of North Korea in the near the future.”

On Sunday, Trump tweeted that: “Kim Jong Un is too smart and has far too much to lose, everything actually, if he acts in a hostile way.”

The President added: “He does not want to void his special relationship with the President of the United States…”

The warning from Trump came as a senior administration official told CNN that the White House had “seen the reports of a test, and are coordinating closely with allies and partners.”

Diplomats from Pyongyang and Washington have been attempting to negotiate a trade that would see Kim give up the country’s nuclear weapons and the ballistic missiles used to deliver them in exchange for relief from punishing US and United Nations sanctions that have crippled the North Korean economy.

But North Korea is seeking sanctions relief that the US has so far refused to provide, and working talks have failed to get off the ground.