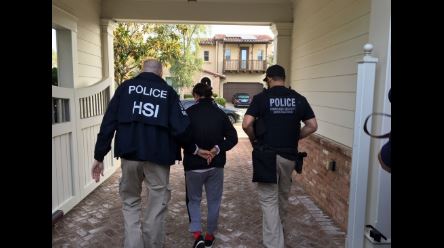 A woman who ran a “birth tourism” operation was released from jail Monday after a federal judge gave her the lightest sentence possible. Now she faces deportation.

Dongyuan Li’s operation, You Win USA Vacation Services Corp., helped Chinese customers — including doctors, lawyers and government officials — travel to the United States to give birth so their children would receive US citizenship.

The operation coached families on what to say in their visa interviews, created ways for them to bypass immigration controls and housed them in upscale apartments in California for up to three months.

Li pleaded guilty to conspiracy to commit immigration fraud and visa fraud. She was arrested in January and has been in jail since then. Judge James Selna said Li had already served time and gave little explanation for his decision.

Tom O’Brien, Li’s defense attorney, told reporters he was happy for his client.

“My client admitted her role in VISA fraud. She didn’t want to go to trial, she accepted an offer from the government and took it, accepted responsibility,” O’Brien said. “Today the government was asking for additional years in custody and we’re pleased and honored that Judge Selna listened to our arguments and agreed with us that 10 months is enough time for the offense she committed.”

US Attorney Charles Pell said he was very disappointed in the sentence. Prosecutors argued for 33 months in prison.

“This is not the sentence we were expecting. It’s disappointing,” he said.

In two years, Li had received $3 million in international wire transfers from China, the US Immigration and Customs Enforcement said. O’Brien said a lot of the money the government cited wasn’t from birth tourism, but from proceeds from the other businesses the family had back in China.

“She didn’t make $3 million,” he said. “There was certain money that was certainly made in this business. That money and anything that was purchased with that money has either been forfeited or is in the process of being forfeited to the government.”

Li will be released by the end of the day Monday and faces deportation.

“We will now pursue deportation since we can show that the current visa she has was derived from her husband who committed fraud to gain his visa,” said Daniel Showalter, a Special Agent within Homeland Security Investigations.

Li is one of three people arrested earlier this year on charges of running Chinese “birth tourism” schemes and among a total of 19 people indicted who were tied to similar businesses, ICE said. Those charges stem from a 2015 raid of dozens of apartments that hosted mothers-to-be, the agency said.

The indictments are the “first-ever” federal criminal charges the American government has brought against birth tourism businesses and customers, ICE said.

‘Strategies to Maximize the Chance of Entry’

“Birth tourists” travel to foreign countries to give birth so that their children receive that country’s citizenship. The American legal principle of jus soli means that babies born on US soil automatically gain citizenship.

That’s not the case in many other countries, including Switzerland or Japan, which do not grant citizenship unless one or more parents are also citizens.

Li and others advertised their businesses online touting the US had the “most attractive nationality,” military, political, technological and cultural strength, 13 years of free education, less pollution, retirement benefits and high quality healthcare services, the federal indictment says.

Citizenship would also give children “priority for jobs in US government, public companies, and large corporations” and would also make it easier for the parents to eventually immigrate to the US, the indictment says.

“America’s way of life is not for sale,” said Joseph Macias, Special Agent in Charge of Homeland Security Investigations in Los Angeles, in a statement earlier this year. “Anyone who would exploit our nation’s generosity and our legal immigration system should be on notice — they may end up being the ones to pay a very steep price.”

To make it inside, the company offered customers tips on how to navigate the loopholes of the customs and visa processes. That was all listed in a document titled “Strategies to Maximize the Chance of Entry,” the indictment says.

One of their recommendations was “that, for best results, Chinese birth tourists should list on their visa applications that “they intended to stay at the ‘5-star’ hotel of ‘TRUMP INTERNATIONAL HOTEL WAIKIKI BEACH (Trump Hawaii Hotel),’ in Honolulu, Hawaii,” the indictment says.

It also suggested customers book flights to Hawaii first and a second to California, as it’d be easier to make it through customs check that way, the indictment says.

Li also suggested women come during the early stages of their pregnancy so they were able to hide that they were pregnant.

They were instructed to lie on their visa applications, claiming they’d be staying in Hawaii, New York or Los Angeles for two weeks.

Instead, customers spent up to three months in Irvine, California.

She lived a lavish lifestyle

Li claimed she served more than 500 customers and that her business was working with a 100-person team. She would use “agents and employees in China to recruit pregnant Chinese nationals” who wanted to give birth in the US, the indictment says.

And when they made their way to the US, they were housed in one of about 20 upscale apartments that Li leased throughout Orange County.

“She was living in an exclusive area of Irvine in a house with housekeepers, her numerous Mercedes (sedans,)” he said.

“We do need to send the message that defrauding our immigration system for profit will not be tolerated and if you do so, you do so at your own peril,” Showalter told CNN. “We will prosecute you and seize your proceeds, bank accounts, vehicles, houses.”