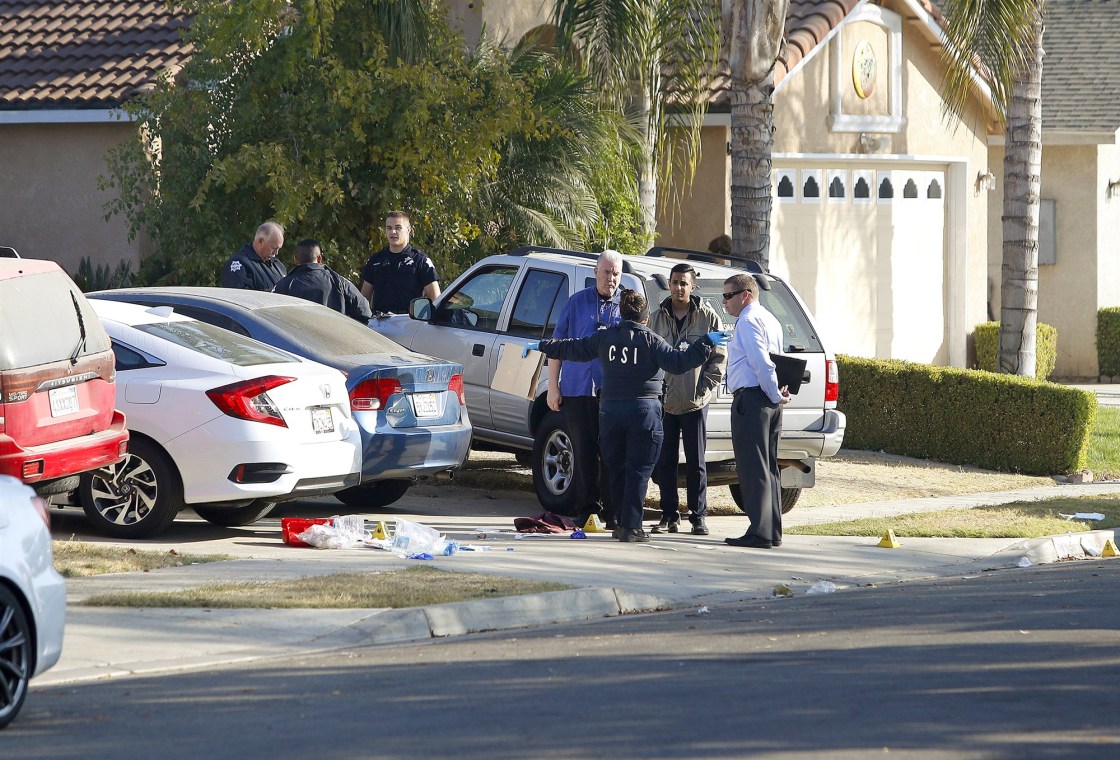 Police in California announced Tuesday that they have arrested six suspected gang members in the shooting deaths of four men last month at a backyard gathering of family and friends that they believed was a rival gang’s party.

The victims were killed Nov. 17 when gunmen entered the back of a Fresno home through an unlocked gate and used semiautomatic weapons to open fire on people watching a football game in the backyard. Four people were killed, and six people were wounded.

Fresno Police Chief Andy Hall said at a news conference that the suspects are all self-admitted members of the Mongolian Boys Society gang and that they were retaliating against a rival gang called the Asian Crips that they believed was responsible for killing a member of their gang hours earlier.

One of the people at the house was an affiliate of the Asian Crips but was not active in the gang, Hall said, though the Mongolian Boys Society believed it was a gang party.

Billy Xiong, 25, of Fresno, was arrested on suspicion of mail theft on Dec. 17, and authorities found one of the weapons used in the killing of the four men, Hall said. His brother was the gang member who was slain before the mass shooting.

Fresno police served 19 search warrants on Dec. 26, recovering the other gun used in the slayings, which had been stolen from Oklahoma, Hall said. Besides the two guns used in the attack, authorities also recovered 12 other weapons and $46,000 in cash believed to be tied to drug activity.

The chief didn’t say who the shooters were but that all six planned the attack.

The six who were arrested are all being held on bail of $11 million each, and it’s unclear if they had lawyers yet who could speak on their behalf.

All the victims were of Hmong descent and the shooting rattled the central California city, home to the second-largest Hmong community in the U.S.

Killed were Xy Lee, 23, a popular singer in the community, and Kalaxang Thao, 40, who is survived by two daughters and a pregnant wife, according to a GoFundMe site.

Another victim was Phia Vang, 31, who supported his parents and younger siblings with earnings from his job delivering clinical lab results.

The shooting occurred at the home of the fourth victim, Kou Xiong, 38, a gregarious sushi chef who loved hosting parties. Xiong is survived by his wife and young daughter.

Both Vang and Xiong were children when they moved to the United States from Thailand as part of refugee relocation efforts.

Hmong, an ethnic minority group from East and Southeast Asia, fought on the side of the United States in the Vietnam War. After the war, the U.S. moved them to places in Minnesota, California and Wisconsin.

In California, Hmong settled in Fresno and the Central Valley, where sponsors hoped they could find work given their agricultural background.