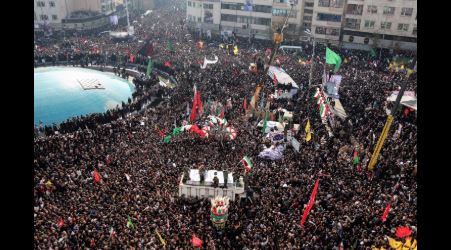 Tehran’s streets were packed with black-clad mourners Monday as a sea of people turned out to pay their respects to Qasem Soleimani, the Iranian general killed by a US drone strike in Baghdad last week.

The mourners clutched photographs of Soleimani, a revered and powerful figure who headed the Islamic Revolutionary Guards Corps elite Quds Force and led Iran’s overseas operations. Posters with his image, and a black backdrop, were plastered across the capital.

Many of those on the streets of the Iranian capital were visibly upset and angry; others shouted “down with the USA” and “death to the USA.” Iranian state television said millions of people attended, although this figure has yet to be verified.

Soleimani’s body was later taken to a ceremony in the holy city of Qom, ahead of a burial in his hometown of Kerman.

Just weeks before, thousands of anti-government protesters had filled the streets to voice their frustration with Iran’s leaders, as well as the crippling economic sanctions imposed on the country by the Trump administration.

But widespread reverence for Soleimani, who commands a cult-like status in the country, has seemingly united Iranians of all political stripes in anger at the US.

Soleimani has been hailed a martyr and a hero inside Iran, especially due to his work in the fight against ISIS. Iranian Supreme Leader Ayatollah Ali Khamenei, the country’s ultimate political and religious authority, was photographed praying over Soleimani’s body during the funeral ceremony alongside President Hassan Rouhani.

General Ismail Qaani — Soleimani’s longtime lieutenant and his successor as Quds leader — was seen crying over his coffin.

The US, however, has long viewed Soleimani as a terrorist and adversary. Washington claims he is responsible for aiding and abetting attacks by Iran’s Shia allies against American troops, many of whom were killed during the bloodiest days of the Iraq War and in sectarian conflicts throughout the Middle East.

President Donald Trump said the decision to kill Soleimani was based on intelligence that he had been involved in planning an “imminent attack” that put American lives at risk.

Washington had already carried out a series of airstrikes in Iraq targeting Kataib Hezbollah, an Iranian-backed group the US held responsible for a series of rocket attacks on American facilities that killed a US contractor.

Trump said Soleimani was killed “to stop a war,” but the action marks a significant escalation that has seen both sides inching dangerously close to the brink of conflict.

Iran has vowed revenge and threatened both the US and Israel. Maj. Gen. Hossein Dehghan, the top military adviser to Iran’s Supreme Leader, told CNN that Tehran would retaliate by targeting military sites. The US operates about 800 military bases and logistical facilities outside its sovereign territory.

And Iranian Foreign Minister Javad Zarif said the country will no longer limit itself to the nuclear restrictions set forth by the international nuclear deal reached in 2015 between Iran and a handful of other countries. The Trump administration abandoned the deal in 2018.

Zarif taunted Trump on Monday, sharing a tweet with photos of the huge crowds in Tehran, and saying: “Do you still imagine you can break the will of this great nation and its people? End of malign US presence in West Asia has begun.”

In an apparent reaction to that message, Trump tweeted: “IRAN WILL NEVER HAVE A NUCLEAR WEAPON!”

The US President has previously responded to Iran’s talk of vengeance by threatening to carry out a series of attack a number of Iranian targets, including cultural sites — a potential war crime.

“Iranian proxy forces in Iraq have thought that they could act with impunity, and that if they acted we wouldn’t take strikes against Iran proper,” US Secretary of State Mike Pompeo told CNN when asked about Trump’s statement. “We’ve made clear for months to the Iranian regime that that wouldn’t be the case, that we were going to hold responsible the actors, the leaders who took these actions and who orchestrated these actions.”

However, the Trump administration’s domestic and foreign critics accused the President and his advisers of failing to think through the cost of killing Soleimani.

House Speaker Nancy Pelosi said in a letter to her fellow democrats that the decision was “provocative and disproportionate” and argued that it endangered US personnel in the region.

The future of US troops in Iraq

Gulf Arab states and European leaders have called for restraint.

Saudi Deputy Defense Minister Khalid bin Salman was expected to “call for restraint” and discuss “de-escalation” in a meeting with Secretary of State Mike Pompeo in DC on Monday, a Saudi government source told CNN.

Iraq’s Parliament voted nearly unanimously to force the government to work toward the removal of US and other foreign troops inside the country, a clear rebuke to Washington over the strike that killed Soleimani.

“Iraqi priorities and the US are increasingly at odds,” caretaker Prime Minister Adil Abdul Mahdi said during his address to parliament.

He said a US troop withdrawal was the only way to “protect all those on Iraqi soil,” especially American forces that require protection from the Iraqis.

Muqtada al-Sadr, a firebrand Shia cleric and fierce critic of the US, said the response by Iraq’s parliament was weak “in comparison to American violations of Iraqi sovereignty.”

Meanwhile, Trump said any move to expel US troops from the country would be met with “sanctions like they’ve never seen before ever.”