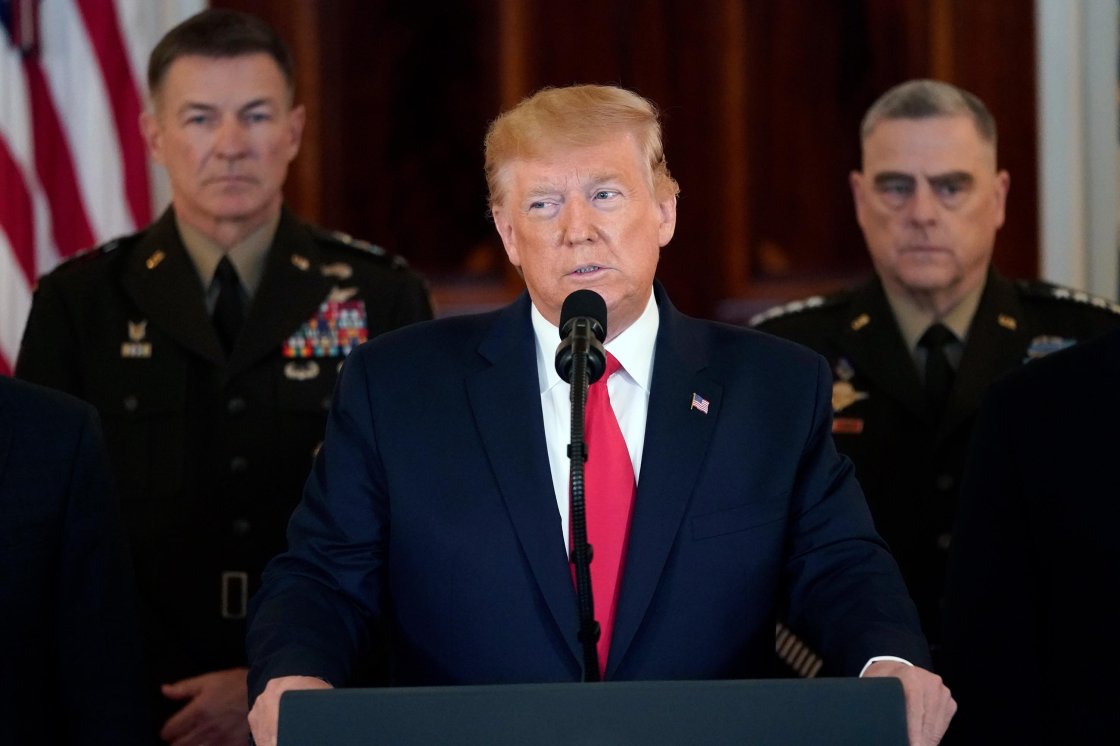 The House of Representatives on Thursday voted to approve a resolution aimed at restraining the President’s ability to use military action against Iran without congressional approval, amid simmering tensions between the US and the country.

Now that the resolution has passed the House it will next go to the Senate.

Freshman Democratic Rep. Elissa Slotkin of Michigan, a former CIA analyst and senior Defense Department official, is the sponsor of the resolution, which calls on the President “to terminate the use of United States Armed Forces to engage in hostilities in or against Iran” unless Congress declares war or enacts “specific statutory authorization” for the use of armed forces.

One additional exception outlined in the resolution is if the use of armed forces “is necessary and appropriate to defend against an imminent armed attack upon the United States.”

A vote on the resolution took place one day after President Donald Trump signaled a deescalation of tensions with Iran, saying that “Iran appears to be standing down” in the wake of its retaliatory attacks against Iraqi bases housing US troops, which came after a US airstrike killed Iranian commander Qasem Soleimani.

Despite the apparent de-escalation, however, Democrats have continued to express alarm over the strike and the administration’s justification in taking the action.

House Speaker Nancy Pelosi said in a statement on Wednesday that “members of Congress have serious, urgent concerns about the administration’s decision to engage in hostilities against Iran and about its lack of strategy moving forward” and announced that the House would move forward with a war powers resolution vote.

It also states that “Congress has not authorized the President to use military force against Iran.”

How the House war powers resolution is structured

The structure of the House resolution is unique, calling into question whether it is actually legally binding.

It was introduced as a concurrent resolution, a type of resolution often used for “sense of Congress” bills. They don’t go to the President for a signature, and they aren’t legally binding.

But Democratic leaders spent time Wednesday working out how to ensure the House version of the Iran War Powers resolution will also get a vote in the Senate, members told CNN. They landed on the concurrent resolution format.

Unlike joint resolutions, concurrent resolutions are not able to be amended in a floor process known as a motion to recommit. Motions to recommit are the last opportunity for the House to debate and amend a given measure before final passage.

There’s a recent example of this: Democratic Rep. Ro Khanna’s Yemen War Powers resolution, passed in February last year, was a joint resolution and was amended in the House before final passage through a Republican motion to recommit to include an amendment condemning anti-Semitism. As a result, the Senate parliamentarian ruled that the amendment was not relevant to the War Powers resolution, which stripped it of its privileged status in the Senate.

Without privileged status, Republican leaders in the Senate are able to ignore the bill and are under no obligation to take it up for a vote. House Democrats wanted to avoid such an outcome this time.

“Of all the things that we could do, I think this is potentially the strongest because it’s privileged in both the House and the Senate. So the expectation is that we would have a vote in the Senate on this resolution,” freshman Rep. Tom Malinowski told CNN Thursday morning. “It was specifically drafted to be privileged.”

But Republicans and Democrats have vastly different views on whether the House Iran war powers resolution is legally binding.

House Democrats are arguing that concurrent resolutions under the War Powers Act are a special case, and they are legally binding.

“This resolution follows the process established in the War Powers Resolution, which requires the President to stop using US forces in hostilities if ‘Congress so directs by concurrent resolution,'” a Democratic aide told CNN Thursday.

“Constitutionally, the President cannot take America into a war until he has a declaration of war or authorization from Congress. If both Houses of Congress concurrently tell the President he cannot continue hostilities, there should be no doubt that the President must come to Congress for legal authorization before taking us to war.”

“This is a statement of the Congress of the United States and I will not have that statement be diminished by whether the President will veto it or not,” Pelosi said.

But the question has not been tested in the courts.

A senior Democratic aide acknowledged “there are arguments for why this part of the War Powers resolution might not be binding” but told CNN the concurrent resolution “makes congressional intent crystal clear and the President should respect that.”

Needless to say, the President is not likely to respect it. Congressional Republicans have hit the resolution as “meaningless,” with House Minority Leader Kevin McCarthy saying it “cannot become law.”

“By definition, it will never be sent to the President, and it will never limit his constitutional authority to defend the American people,” the California Republican said at his weekly news conference on Thursday.

Democratic leadership’s reasoning hasn’t convinced everyone in the caucus; Rep. Max Rose, a freshman from a New York district Trump won in 2016, said the President was justified in the strike on Soleimani and announced he will vote against the resolution.

“Unfortunately, today’s War Powers Resolution is a non-binding resolution that simply restates existing law and sends the message that war is imminent,” he wrote in a statement. “I refuse to play politics with questions of war and peace and therefore will not support this resolution.”

A war powers resolution on Iran is also being pushed forward in the Senate, though it is not yet clear if it will have the votes to pass in the Republican-led chamber.

In the Senate, Democratic Sen. Tim Kaine of Virginia introduced his own war powers resolution last week along with Democratic Sen. Dick Durbin of Illinois. The measure is privileged, which means that the Republican-controlled Senate will have to hold a vote.

The resolution directs the President to remove US forces from hostilities with Iran no later than 30 days after the resolution is enacted absent a declaration of war by Congress or passage of a new authorization for use of military force, a type of measure that lawmakers can approve to green-light military action.

Even as the military conflict with Iran appeared to have de-escalated on Wednesday, Kaine said that he will continue to press ahead with his effort to limit Trump’s authority on Iran.

He added, however, that the timing may be complicated by the fact that it’s uncertain when a Senate impeachment trial will begin. But since it’s privileged, the Senate must vote on it.

“What we learned from the last 18 months is … this thing has been going up and down cycles … and deliberation is the antidote to unnecessary escalation,” Kaine said of conflict with Iran.

The War Powers Act stipulates parameters of presidential and congressional war powers, including imposing procedural requirements to ensure that presidents keep Congress apprised of military decisions as well as provisions that provide Congress with a mechanism to suspend military operations initiated by the President in certain circumstances.

It was enacted after Congress overrode a veto from then-President Richard Nixon and is aimed at reining in a president’s authority to engage the US in military action without congressional approval.