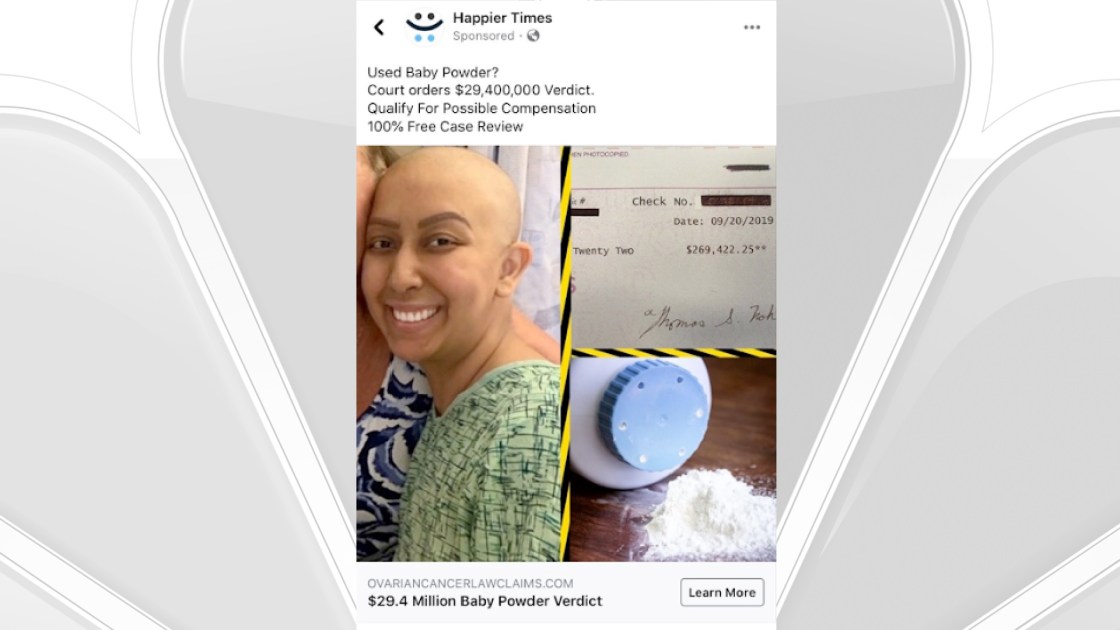 UPDATE:
A Facebook representative sent us a message saying they could not find the ad in their library but apologized for the incident. They asked Corrina to fill out a form in order to investigate.

Twenty-eight-year Corrina Santacruz is fighting leukemia. An image she posted to Instagram of her in the hospital captures a special moment in her life.

So you can imagine the shock she felt to see that image in that image on Facebook ad that falsely claims she won a $200,000 plus settlement in a talc cancer lawsuit. Her cancer has nothing to do with talc, she never filed a claim or gave permission for the image to be used.

“I’m over here battling for my life, I‘m trying to live a positive life as possible and then you see something so degrading, it’s really hurtful and I think it should be taken down,” she says.

Corrina is desperately trying to find a bone marrow donor match. She’s a single mother. She wants to live and care for her 12-year-old daughter Vida who is blind and autistic.

“It’s been really heartbreaking but I try to spend as much time with my daughter as I can try to go on trips doing little things here and there just to make her happy,” she says.

She’s reached out to Happier Times, the company that posted it and Facebook. We did too, for days, and tried to follow the endless links. We received automated messages and zero help. She says the false story hurts her reputation and chances of finding a donor.

“I don’t want people to think that I was actually using my cancer to profit and get money,” and is afraid people might think her real story is a lie.

But she says this company and Facebook don’t seem to mind profiting off of her pain, “They’re basically making money off of somebody that’s actually going through real life hard time … and that’s not, that’s not fair at all.”