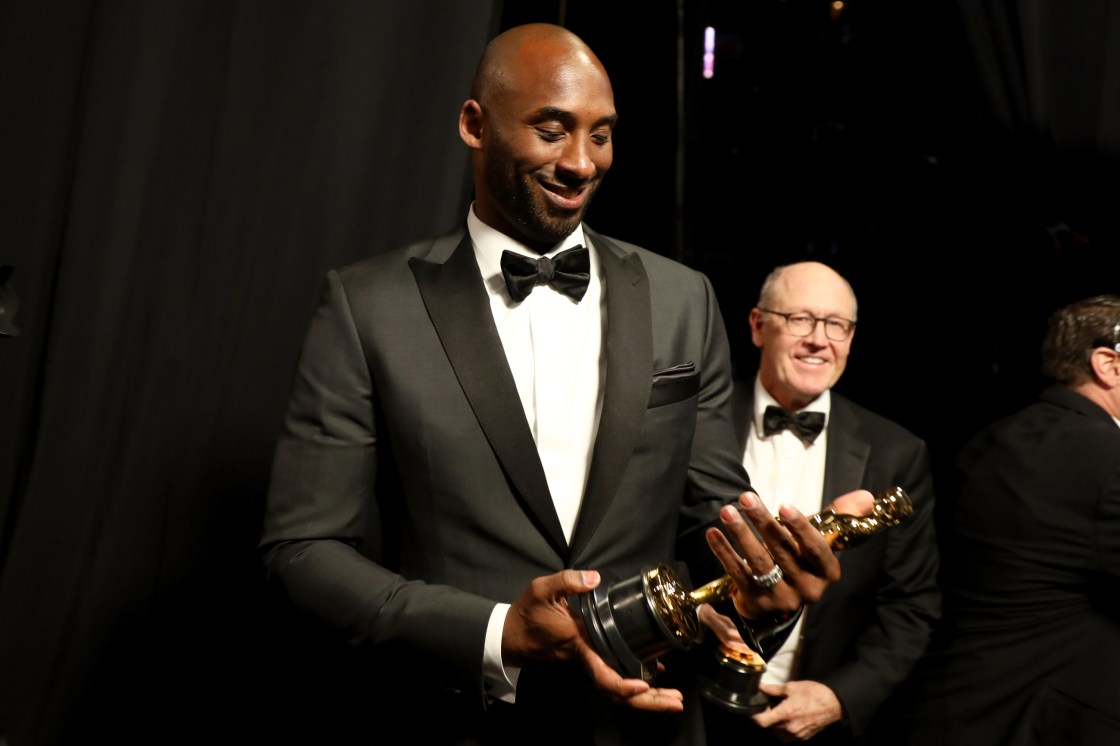 He was born to play basketball, but for Kobe Bryant that was never enough

Kobe Bryant left the NBA on his own terms on April 13, 2016, scoring 60 points — more than any other player in a game that season — in a win over the Utah Jazz as he drew the curtain on his historic 20-year career.

On Sunday, the 41-year-old tragically left the world in a helicopter crash outside of Los Angeles, California that killed nine people including his 13-year-old daughter Gianna.

The outpouring of tributes from those in and out of basketball, including Barack Obama, Rafael Nadal and former Los Angeles Lakers teammate Shaquille O’Neal, provide a glimpse into how Bryant’s legacy will be shaped after his death.

On the court, he will go down as one of the greatest to ever play the game, winning five championships, two NBA Finals MVPs and two Olympic gold medals, while finishing fourth in career scoring — he was surpassed by current Lakers captain LeBron James on Saturday.

Off the court Bryant was many things: An intellectual who switched effortlessly between Italian, Spanish and English; a doting father to four daughters, a budding media mogul who won an Oscar, a fervent soccer fan of Barcelona and AC Milan, a champion of women’s sports, and an inspiration to younger players for his winning attitude that he labeled “Mamba Mentality.”

However, his sexual assault charge stemming from a 2003 incident in Colorado, which was dropped and then settled out of court in a civil suit, complicates his legacy in the #MeToo era and led to protests after his Oscar win in 2018.

But the experience, which cost him millions of dollars in endorsement deals at the time, also developed him as a person and allowed the release of the non-apologetic and at times overly brash competitor in him, he later said.

Growing up with ‘vengeance’

Bryant was the son of former NBA player Joe “Jellybeans” Bryant, who transitioned to the Italian league when his son was just six years old.

It was in Italy where Bryant’s love of soccer was shaped and where he also experienced racism.

“When I was growing up in Italy, I’ve obviously witnessed it first-hand going to certain soccer matches and things of that nature,” Bryant recently told CNN’s Andy Scholes.

“My parents have taught me and educated me on how to deal with those sorts of things.”

Growing up in Italy shaped the younger Bryant both socially and competitively, he said.

“Our parents immersed us in Italian culture. We were just surrounded by Italian kids. We were just learning the language as they were,” he told O’Neal in an interview for TNT in 2018.

That is also when his killer instinct began developing on the court.

“A lot of it had to do with isolation, growing up over there and being the only African-American kid … I gravitated towards the game and in that game you find solace,” he said.

“And when you play with kids that may not accept you because you’re an outsider, that’s my chance to get vengeance on them for not accepting me. And that’s where it started developing, and throughout the course of my life it’s always been that.

“It’s always been the outsider who is coming in to prove (something) or seek some kind of vengeance,” he added. “I always had ambition.”

Bryant would grow to become a 6-foot 6-inch scoring phenomenon as a Philadelphia high schooler. He was the first guard to be drafted directly from high school to the NBA in 1996 as the 13th overall pick by the Charlotte Hornets.

Lakers general manager Jerry West had his eyes set on the 18-year-old, however, and traded for him in a deal that was overshadowed by the team’s splashy signing of O’Neal.

The dynamic pair would go on to win three NBA Finals from 2000 to 2002, with O’Neal very much the alpha of the team. By the time the Lakers lost to the Detroit Pistons in the 2004 Finals, however, friction had come between the two superstars who were barely on speaking terms.

The difference between their offseason work ethics was largely to blame, with Bryant calling O’Neal “fat and out of shape,” before the start of their final season.

“I’ll admit a lot of times I didn’t come into camp ready … because I had you, I was able to chill out in the summer,” said O’Neal, who patched things up with Bryant, in the TNT interview. “That’s what pi**ed me off; my (butt) was in the gym 10 hours a day,” Bryant responded.

O’Neal was traded to Miami and the Lakers were rebuilt around Bryant, who would bring a further two championships to Lakers Nation alongside Pau Gasol in 2009 and 2010.

The birth of The Black Mamba

O’Neal’s departure from the Lakers coincided with the end of Bryant’s trial in 2004, which relieved the team from the media frenzy that had dogged it throughout the preceding season.

The sexual assault criminal trial was dropped when the unnamed defendant chose not to testify, but Bryant paid an undisclosed amount in a civil suit settlement and apologized to her publicly.

“Although I truly believe this encounter between us was consensual, I recognize now that she did not and does not view this incident the same way I did,” he said in a statement read by his lawyer.

Bryant reflected on the incident to the Washington Post in 2018, noting that it changed his personality both on and off the court.

His coping mechanism, he said, was to create an alternate personality for himself, a ruthless character known as “The Black Mamba,” a name he derived from a scene in the movie “Kill Bill.”

He inked his first tattoos and played with a noticeable scowl aimed at opponents and lagging teammates.

“I don’t know what would’ve happened had I not figured it out because the whole process for me was trying to figure out how to cope with this,” he said. “I wasn’t going to be passive and let this thing just swallow me up.

“You’ve got a responsibility: Family, baby, organization, whole city, yourself — how do you figure out how to overcome this? Or just deal with it and not drown from this thing? So I was bound to figure something out because I was so obsessively concerned about it.”

In ensuing years, Bryant would become prolific on social media and sign off on many posts with the hashtags #mambamentality and #mambaout.

He wrote his book “The Mamba Mentality: How I Play,” and christened his Mamba Sports Academy in 2018.

NBA players on other teams looked to Bryant for inspiration. Before hitting his game-winning shot to ice the 2016 title for the Cleveland Cavaliers, Kyrie Irving spoke with the Lakers legend to get in the right frame of mind.

“I had been speaking to him throughout the entire playoffs and during the season,” Irving told ThePostGame. “I actually FaceTimed Kobe after the game as soon as I got in the locker room … (it) was just a great thing, knowing how he has won five and I just won my first.

“Then realizing how hard it is just to win one, my respect for him is already high, but it went to another level knowing that he’s got five of them.”

In a nod to Bryant’s influence on a new generation of competitors, “Mamba mentality” along with Bryant’s #24 was scribbled on the shoes of 15-year-old tennis star Coco Gauff as she played a doubles match at the Australian Open on Monday, while Nick Kyrgios warmed up for his match wearing Kobe’s old No. 8 jersey — both uniform numbers have been retired by the Lakers.

‘What am I going to do with the rest of my life?’

Bryant hobbled through his final few seasons, suffering from a torn Achilles tendon in April 2013 and torn rotator cuff in January 2015, and began thinking about the next phase of his life and interests outside of basketball.

A lifelong soccer fan, he formed ties with his favorite teams and players from Barcelona and AC Milan — notably Neymar and Ronaldinho — attending practices when his schedule allowed it.

He also became a champion of women’s sports — Bryant was visibly in the stands at Wembley Stadium when the Team USA women’s soccer team won gold at the London 2012 Olympics — and attended WNBA games with his daughters.

Notably, he would run Gianna through basketball drills, some of them posted on social media, with his eldest daughter displaying the same fierce competitive spirit as her father.

He launched a branding company, Kobe Inc., in 2014 and later multimedia production company Granity Studios. Then he won the Oscar in 2018 for Best Animated Short Film based on his open retirement letter, “Dear Basketball.”

Leaving a legacy outside of basketball was clearly as important to Bryant as his achievements on the court. But how could he match the thrill of scoring 81 points in a game, something only one other person in history had achieved?

“I was in Milan and wanted to meet with Giorgio Armani and talk to him a little bit about how he built his business,” Bryant said as he announced his retirement in 2015. “He started to build his business at the age of 40, and I was 21.

“I said to myself, I’ll probably play to 35, 36, whatever the case may be. He built a whole business at 40. What am I going to do with the rest of my life? What comes next?

“From that point on, I started figuring things out, trying different things. Dabbling in this, dabbling in that, trying to figure out what exactly that passion is,” he added.

“It’s not as easy as basketball, because I was born to play basketball and had to really work to figure out what comes next.

“That’s really hard, man; really, really hard. But that’s what we as athletes have to figure out.”