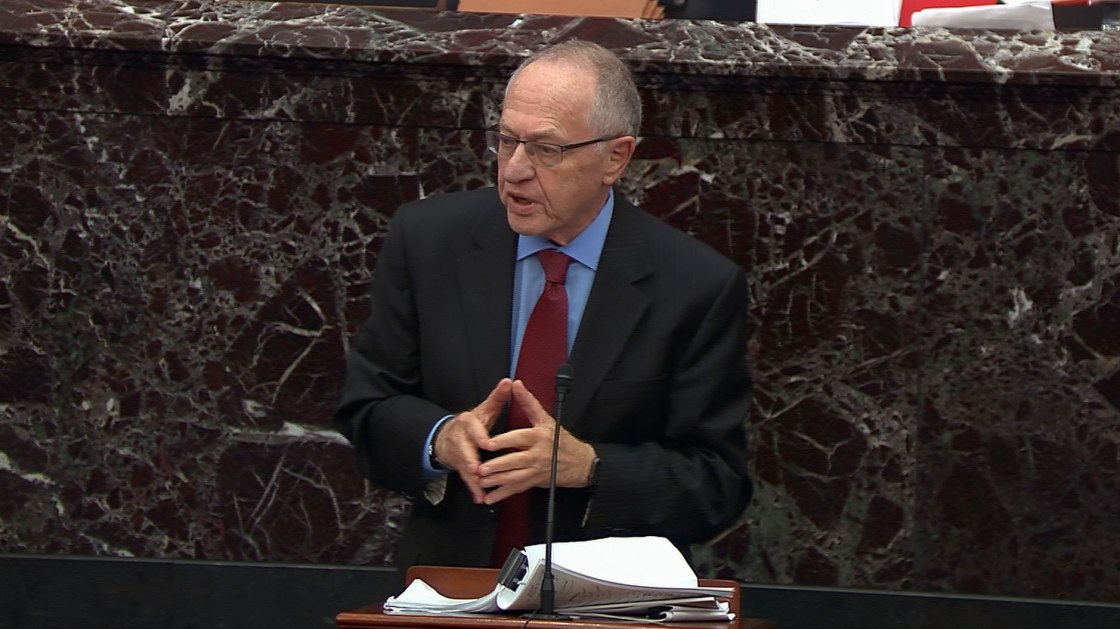 A member of President Donald Trump’s legal team argued on the Senate floor Wednesday that a politician trying to win reelection is acting in the national interest, and therefore a quid pro quo aimed at boosting reelection chances cannot be impeachable.

Alan Dershowitz, a Harvard Law School professor emeritus and high-profile defense attorney, argued that Trump cannot be impeached for pressuring Ukraine for investigations into former Vice President Joe Biden because doing so would be aimed at helping his reelection chances. Dershowitz said Trump’s motivations would ultimately be fueled by the public interest because he believes his reelection is what’s best for the country.

“And if a president did something that he believes will help him get elected, in the public interest, that cannot be the kind of quid pro quo that results in impeachment.”

The comments, which came in response to a question about the legality of quid pro quos, could normalize the type of behavior that landed Trump in the middle of the impeachment scandal, and that Democrats say constitutes an improper solicitation of foreign influence in a US election.

Dershowitz added that all elected officials consider things in political terms, asking, “If you’re just acting in the national interest, why do you need pollsters?”

“We may argue that it’s not in the national interest for a particular president to get elected,” he said, “and maybe we’re right,” but in order for it to be impeachable, he argued, one would have to prove that the decision was based solely on “corrupt motives.”

“A complex middle case is ‘I want to be elected. I think I’m a great president. I think I’m the greatest president there ever was and if I’m not elected, the national interest will suffer greatly.’ That cannot be an impeachable offense,” Dershowitz concluded.

Trump’s legal team does not concede that the President attempted a quid pro quo. Dershowitz was speaking hypothetically. In his defense of Trump this week, Dershowitz has relied on controversial theories that are rejected by a wide cross-section of legal scholars.

CNN legal analyst Carrie Cordero said on Wednesday that Dershowitz’s argument “invites and opens the door to anything that is in the realm of foreign influence.”

Dershowitz’s comments come in the final phase of the trial before the Senate will debate and vote on whether to seek witnesses and documents. His arguments reflect the contention of a growing number of GOP senators, who are acknowledging that Trump may have leveraged US security aid for political reasons but assert that such conduct does not warrant removal from office or hearing from additional witnesses.

“All quid pros are not the same,” he said. “Some are legitimate and some are corrupt, and you don’t need to be a mind reader to figure out which is which.”

Democrats have pointed to Biden’s push for the dismissal of a top Ukrainian prosecutor as an example of a legitimate foreign policy quid pro quo. They argue he was acting in accordance with established US policy, and promoting the views of international organizations like the International Monetary Fund.

Trump’s team has argued, without providing credible evidence, that Biden actually did this to protect his son’s “corruption” in Ukraine. There is no evidence of wrongdoing by either Joe or Hunter Biden.

Democrats argue that what sets Trump’s behavior apart is that there is substantial evidence that withholding the US aid was not in accordance with official US policy toward Ukraine. Defense Secretary Mark Esper and Secretary of State Mike Pompeo, along with then-national security adviser John Bolton, all had lobbied Trump to release the aid before the President relented in September. Additionally, the nonpartisan Government Accountability Office determined Trump’s decision to withhold the appropriated funds violated the law.

Trump’s lawyers argued Wednesday that only the President sets foreign policy, not his advisers or lower-level diplomats.

The presence of Dershowitz on Trump’s legal team was a surprise announcement just before the impeachment trial began. White House officials had applied a lot of pressure over the last several weeks to convince Dershowitz to join the team, sources familiar with the attorney’s appointment said.

His short tenure defending Trump, however, has been largely defined by a series of contradictory statements from his past.

Earlier this month, he told CNN’s Anderson Cooper that he is “much more correct right now” in his current views on what qualifies a president for impeachment than in his nearly opposite views during the Bill Clinton impeachment.

“I didn’t do research back then, I relied on what professors said … because that issue was not presented in the Clinton impeachment,” Dershowitz said. “Everybody knew that he was charged with a crime, the issue is whether it was a hard crime. Now the issue is whether a crime or criminal-like behavior is required.”

On Tuesday, CNN’s KFile reported that Dershowitz had said in 2016 that he believed Trump was more corrupt than Hillary Clinton and more likely to continue being corrupt as president.

“When you compare that to what Trump has done with Trump University, with so many other things, I think there’s no comparison between who has engaged in more corruption and who is more likely to continue that if elected president of the United States,” Dershowitz said. “So I think what we’re doing is we’re comparing, we’re saying, look, neither candidate is anywhere close to perfect, let’s vote for the less bad candidate.”