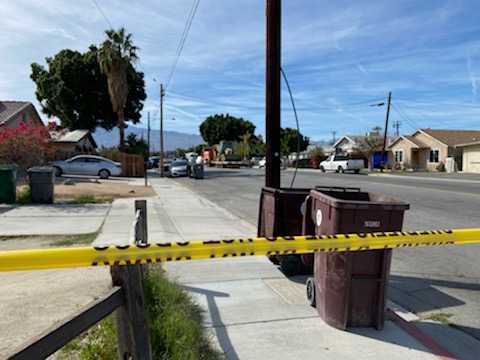 Riverside County Sheriff’s investigators have been searching a home on Fourth Street in Coachella since noon on Wednesday, a search that is so intense, they brought in heavy machinery and shut down part of the street. People were only allowed in their homes with a deputy escort. People who live here are curious and concerned.

Many people we spoke with did not want to be identified.

“We really don’t know what’s going on so what if it was something really bad and we live so close to it that we might have been in danger,” said one resident.

A forklift brought out pallet after pallet of concrete pavers.

What they’re looking for no one knows, but the activity is alarming.

“It’s a very quietish neighborhood but nothing like that ever comes up so it’s pretty shocking,” says Priscilla Ortiz who says her girlfriend’s grandmother lives on the street.

The sheriff’s department only saying investigators are following up on a case. They were seen bringing out bags filled with evidence. They seemed determined, searching and excavating well into the night.

But the lack of information only fueling fear.

“I have kids so it is a little bit worrying and not knowing what it’s exactly about it’s a little more concerning,” says a woman who lives on the street.

An orange SUV on a separate property was also thoroughly searched.

On Thursday there was less activity but the road closure between Palm Avenue and Cesar Chavez St. was still being strictly enforced.

People who live here have been forced to park outside the barricade disrupting their daily lives.

“I have to cross back and forth with my baby and it’s kind of pretty cold weather for my two month old, I have groceries and you know, it’s pretty disturbing and I hope they finish pretty quick, cause we don’t even know what’s going on they don’t say anything so we’re kind of confused as what’s going on,” says a mother who lives on the street.

The Riverside County Sheriff’s Department says the street will continue to be closed until further notice and they appreciate the community’s patience and cooperation.