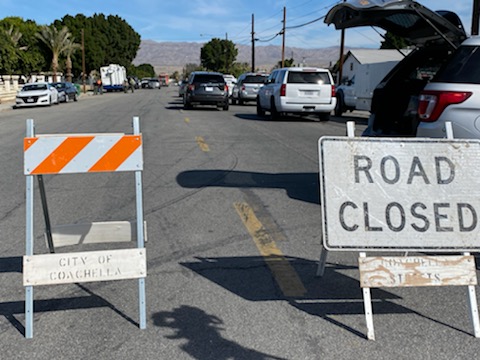 It’s day three of an investigation in Coachella. Neighbors’ lives are still being put on hold while the Riverside County Sheriff’s Department is holding out on any information.

Friday morning, the street was as busy as ever with deputies and investigators. Unfortunately, none of them released any information to NBC Palm Springs.

Instead, the Riverside County Sheriff’s Department released a tweet on Friday:

Neighbors NBC Palm Springs spoke with were too afraid to go on camera but said they are discouraged about the lack of transparency. People are having to be escorted to their homes.

“The kids go to school, there’s people here that go to work,” a neighbor who chose to be anonymous said.

Neighbors are having to park in a sand lot right next to the neighborhood while the street is closed off. Throughout the investigation, a forklift has brought out pallets of cinder blocks from the yard. Deputies also recovered bags of evidence, brought out one by one.

NBC Palm Springs reached out to the District Attorney’s office and the Riverside County Sheriff’s Department but did not receive a response.

“What if it was something really bad and we live so close to it so we might’ve been in danger,” another anonymous neighbor said.

While there is little information, there has been a lot of speculation, including posts on Craigslist. None of these posts have been confirmed by officials at this time.

Stay with NBC Palm Springs for the latest.