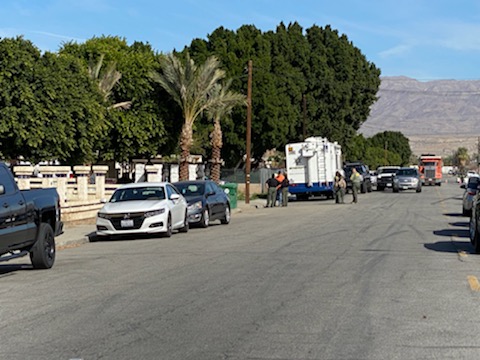 Coachella Man Claims Family is Being Harassed Since Search Warrant

Fourth Street in Coachella may seem like a quiet neighborhood, but the man who lives here says since Riverside County Sheriff’s Investigators searched his home he and his family have been living a nightmare. He didn’t want to be identified, but says a relative owns the home and he’s only been there for a couple of years.

The search started on Wednesday and went on for several days. Investigators shut down the street, brought in heavy machinery to move construction materials and dug up the backyard. They were seen taking out bags of evidence. The Riverside County Sheriff’s Department only saying they were serving a search warrant, following up on a case and there was no threat to the public.

But according to the resident people have been spreading rumors that are outrageous and unfounded. We found one on Craig’s List … That says a serial killer is being investigated on fourth st and 12 bodies were recovered. he Riverside County Sheriff’s Department says the rumors are just that rumors, there were no bodies found and the search warrant is sealed, so we cannot see why it was served.

The resident tells us these lies are putting him, his wife and children, in danger. He says things are thrown at his home, cars stop in front of his home and take pictures that are posted to social media where more rumors are spread. He says they’re afraid to leave their home and was never under arrest just detained while they searched the property.

He also says he works construction and has been remodeling the home, he says some in the media have fueled rumors by showing holes in his front yard. He claims he dug the trench himself before the search because there was a blockage in the sewer system. The City of Coachella tells us there was no work done on that street. He says where investigators dug was the backyard and they filled in where they dug.

We spoke with a neighbor who says there have been more cars going through there since the search, he says no family should be harassed, “It’s wrong, in the two years we’ve lived here we’ve never had any problems with them, I’ve never seen anything bad there, it’s peaceful here and they shouldn’t do that to him, it’s sad.”

The resident also tells us he has not had gas in his home since the search and there was extensive damage done to sprinkler systems in his backyard and wants it fixed. We reached out to the Riverside County Sheriff’s Department who tells us they were there with a judge approved search warrant and he needs to file a claim with the county for damages.

The City of Coachella also tells us the resident needs to contact the gas company to get his utilities turned back on.