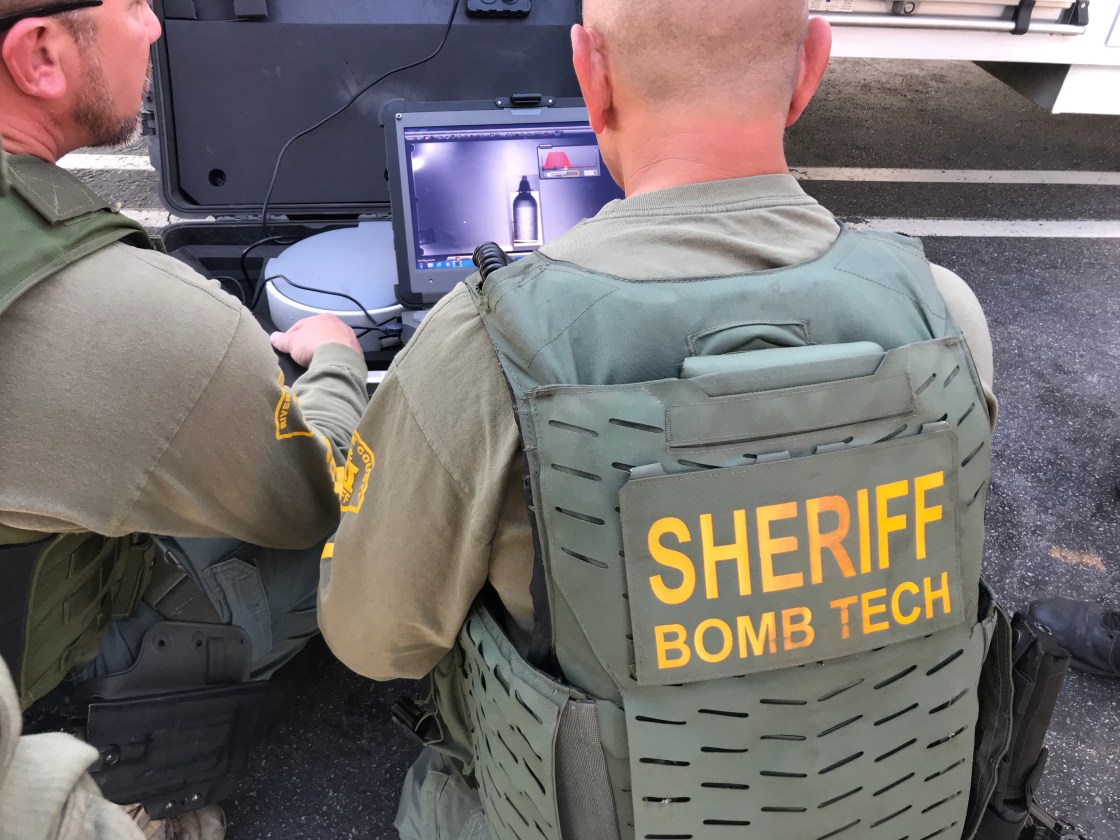 The Riverside County Sheriff’s Department’s Hazardous Device Team, better known as the bomb squad gets a call there’s an explosive device in the middle of a shopping center in Lake Elsinore on Thursday just before noon.

Anytime a call like this comes in this team is ready to respond with the latest tactics, equipment and training. You may think a team like this doesn’t go on many calls but you’d be wrong. Every year they respond to over 250 calls.

“The majority of our calls are military ordinance found explosives that people actually find stuff sitting around and suspicious packages,” says the team’s supervisor Sgt. Bob Epps, who’s been doing this dangerous work for over 30 years.

Epps gives them their marching orders.

When the team arrives, there’s already a frenzy of activity.

“We do have businesses that could be in potential range of the blast we do have them evacuated,” says Deputy Robert Anderson, a bomb technician.

From an image they receive in advance they believe it’s a WW2 device.

“It looks like a WW2 Jaanese mortar. If it does go off it has a five meter kill rate, anyone within five meters is subject to death,” says Anderson in a matter of fact voice.

Deputy Scott Larsen, a bomb technician suits up with protective gear, he’s will be the one to go in.

“This one would go high power rifles as well as handle a lot of ordinance pieces that would come flying off if it were to blow up,” he explains of his protective vest.

His job is to first go in and take an x-ray.

He goes in, being careful not to disturb it, anything can set it off it’s it’s live.

He comes back with the film loads it up to a computer and the inside is carefully analyzed.

“We look for a fill line we look to see if the fuses are intact or have already been manipulated,” says Anderson.

As the image comes up to their trained eyes they know instantly. It’s not live. But the danger isn’t over.

Deputy Larsen has to go back in.

“There’s nothing in it but I‘m going to confirm, take it apart, confirm there’s nothing in it,” says Larsen as he puts his helmet back on, admitting nothing is 100 percent, “in case we missed something then that will give me the protection.”

He goes back takes it apart. There’s silence.

He’s met by Deputy Anderson. They both look relieved.

“Just confirmed what I saw in the x ray that there’s noting inside of the device. I feel great just like what I do,” he says with a good laugh.

A successful day here means something most of us take for granted.

“Today is a great day,” says Anderson with a big smile, “we get to go home.”

We salute these heroes who risk their lives to keep our communities safe.