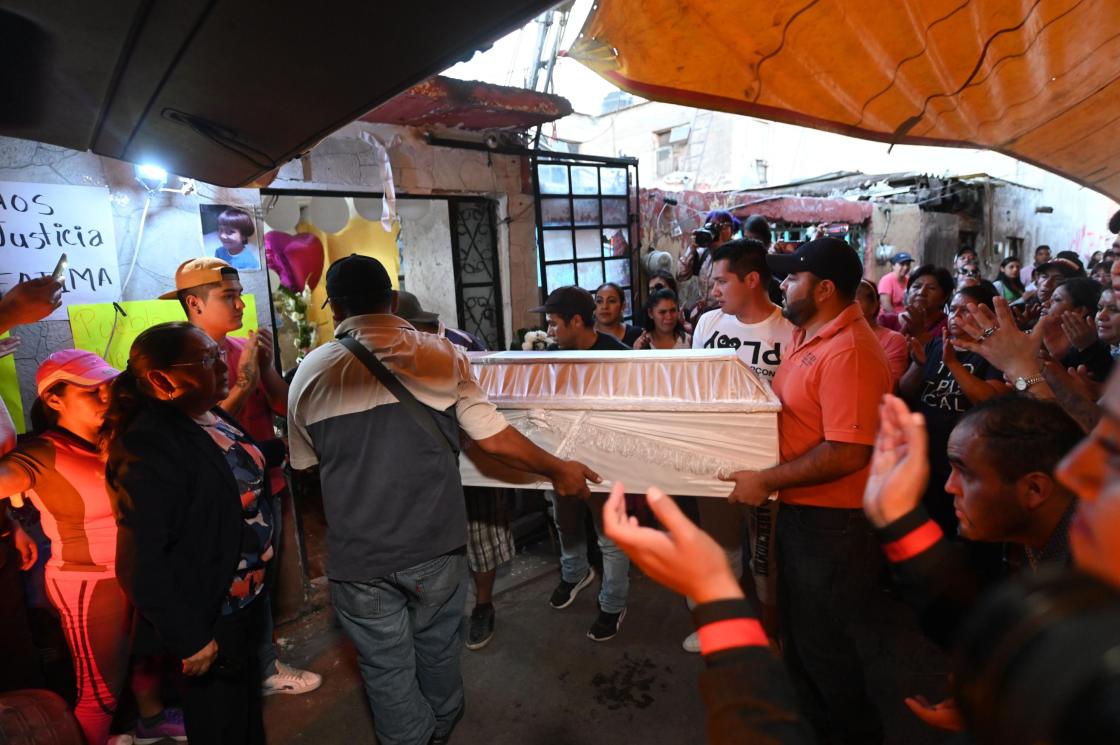 (CNN) — A young girl, known only as Fátima, was last seen being picked up from school by an unidentified woman in Mexico City on February 11.

The next day, the 7-year-old girl was reported missing. She was later found dead, her body inside a plastic bag.

The news of the killing was shocking, and sparked a fresh outpouring of fury and political finger-pointing in Mexico, where a crisis over the brutal slayings of women and girls has forced residents to spill onto the streets in anger.

Fátima’s body was discovered in Tláhuac, a municipality in the south of Mexico City, over the weekend, according to Ulises Lara López, spokesman for the attorney general’s office in the city.

The girl was sexually abused and beaten before she died, Mexico City’s Attorney General Ernestina Godoy Ramos said at a news conference Tuesday.

The investigation is dominating headlines in the country, coming just days after another brutal killing, that of 25-year-old Ingrid Escamilla, who was skinned and mutilated in Mexico City before her partner was arrested, having confessed to killing her following an argument where he said she attacked him with a knife.

According to Mexico Attorney General Alejandro Gertz, femicides — the killing of women on account of their gender — have increased 137% in the last five years. A total of 1,006 were reported in 2019, compared with 912 the year before.

But even that number illustrates only a portion of the problem: Every day, 10 women are killed in Mexico, according to authorities and activists who argue more cases need to be classified as femicides.

The rate of femicides was described on Monday as a “social ill” by the country’s President, Andrés Manuel López Obrador — but he, too, has been condemned for other comments regarding the killing of Fátima, which he appeared to blame on the neoliberal economic policies and society as a whole.

Meanwhile, the child’s relatives have blamed authorities for wasting the first precious hours after their daughter went missing.

‘Crime will not go unpunished’

Fátima was last seen in the company of a woman, who through video surveillance, was seen picking up the young girl from school, the Mexico City Attorney General’s Office told reporters on Monday.

Later that day, her mother went to the school to pick up her daughter but was unable to find her. She reported her missing the next day, after frantically searching for her to no avail.

A white vehicle spotted in the area has drawn the attention of investigators. Authorities have interviewed at least five witnesses and a property in the Xochimilco neighborhood has been searched.

Mexico City’s Attorney General’s Office has also urgently appealed to the public for help, offering a reward of 2 million pesos ($107,000) in return for any information, especially the woman seen on video surveillance and her whereabouts, according to Lara López during Monday’s press conference.

Officials have said the woman is key to the investigation, but have not said whether she is a suspect.

During a press conference Tuesday afternoon, Godoy Ramos said the investigation and interrogations continue, allowing them to create a sketch of the woman in the video.

“We want to ask everyone to support us with the dissemination of the image, as well as the physical characteristics to the person we’re referring to,” she said adding that this woman was key to the investigation. “It is essential to know the whereabouts of the woman and everything that happened,” Godoy Ramos said.

But relatives have since blamed authorities for dragging their feet in the initial hours after the report.

Sonia López, the child’s aunt, told reporters: “It’s not possible that they lost fundamental hours to find her.”

“She could have been found alive and nobody paid attention to us,” she said in anger adding that there were those who sympathized but authorities didn’t have the “resources.”

Godoy Ramos has ordered an investigation into the actions of the Attorney General’s Office in the nation’s capital following complaints that the authorities failed to assist when the complaint for a missing person was filed.

“I have instructed the investigator’s office to carry out a detailed investigation into the actions of the @FiscaliaCDMX [Mexico City Attorney General’s Office] who knew of the complaint on the disappearance of the girl Fátima Cecilia,” Godoy Ramos said on her Twitter account Tuesday morning, adding that the investigation “will be open to the family” and “the investigation will be promptly informed.”

“I want to express to Fátima’s mother and father, to her brothers, as well as to each of her relatives, my deepest sympathy, and point out that we will not rest until we find the culprits, each and every one of the guilty,” she added in a press conference.

At a separate press conference Tuesday, Godoy Ramos reiterated that any “act of omission or negligence” on behalf of the authorities would be “sanctioned according to law.”

The mayor of Mexico City, Claudia Sheinbaum, on Twitter described Fátima’s killing as an “outrageous, aberrant and painful” act, days after writing in relation to Escamilla’s slaying that “femicide is an absolutely condemnable crime. It is appalling when hatred reaches extremes like in the case of Ingrid Escamilla.”

“This crime will not go unpunished,” Sheinbaum added, regarding the Fátima case.

But as anger over the newest case grows, Mexican President Andrés Manuel López Obrador has found himself coming under scrutiny.

López Obrador condemned the crime when asked by reporters on Monday, but said punishment alone was not the solution.

At a press conference, he blamed the rise in femicides partly on a society that had “fallen into decline, a progressive degradation that has to do with the neo-liberal model,” saying these crimes were caused by hate, “social problems, family problems,” a “social disease.”

“This doesn’t get solved with jails and police or with harsh threats,” López Obrador said. “We must tend to the deep substance of well-being and the well-being of the soul.”

Neoliberalism is a frequent target of López Obrador’s ire, but his decision to refer to a common political talking point in relation to the topic of femicide angered many observers.

Several commentators have criticized the president’s response to a burgeoning crisis. The hashtag #JusticiaParaFátima — “Justice For Fátima” — also trended on Twitter.

Femicides and other violent crimes have risen in Mexico in recent years. More than 35,000 homicides were recorded in 2019, a record number that exceed the previous high of 33,341 set in 2018. Many of the homicides are linked to drug cartel violence.

‘The community is afraid’

Anger was already on display on Mexico’s streets before Fátima’s body was found. Its discovery has only deepened the distrust between women’s right demonstrators and the country’s authorities.

“I was born and raised here and now the violence is more than ever,” Armando, 59, told CNN at Friday’s rally in Mexico City for Escamilla, asking to go only by his first name. “This was too violent, and the community is afraid.”

The decision of a handful of newspapers to publish disturbing leaked photos of Escamilla’s body sparked outrage, and a number of women took part in Friday’s march in solidarity with Escamilla over the same weekend during which Fátima’s body was discovered.

Fear had been stoked by Escamilla’s gruesome killing that week, which prompted the public action.

López Obrador told a press conference last Thursday that the person responsible for leaking the images should be reprimanded. “This is a crime, that needs to be punished, whoever it is,” he said.

Protesters created a vigil with flowers and candles in front of the building where Escamilla’s body was found, a picture of her hanging on its wall. Others carried signs urging government action.

But Friday’s march wasn’t the first time Mexicans have taken to the streets to protest the rate of femicides. Similar events have taken place in recent years, usually triggered by other high-profile cases.

“Mexico faces a major challenge in terms of violence against women,” the country’s National Institute of Women said after Escamilla’s death, in a statement that also lambasted media outlets for publishing the images.

The organization held a moment of silence for Fátima.

Fátima’s body was laid to rest Tuesday afternoon while the anger throughout the country resonates with this latest victim in a country marred by violence and impunity.