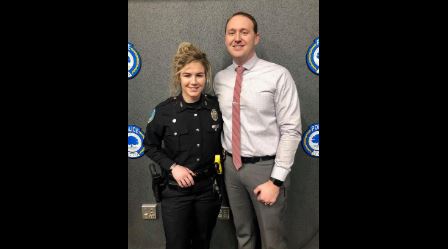 (CNN) — Two off-duty police officers who stopped a robbery at a chicken restaurant in Kentucky said it would be a mistake to call their actions heroic.

“When you’re in the moment, you know, it’s more of training kicks in,” Nicole McKeown told Randi Kaye on “Full Circle.” “I don’t think really either one of us gave a thought as to our immediate safety.”

McKeown and her husband, Chase, were having a normal date night at Raising Cane’s in Louisville on Saturday when things took a turn. A man came in wearing a mask, and when the McKeowns saw an employee behind the counter put their hands up, both realized what was happening.

“(We] quickly pieced it together and just went from there,” Chase said.

The McKeowns, officers with the Elizabethtown Police Department, drew their weapons and chased the suspect out of the restaurant.

“Instinctively, we just followed him out,” Chase said. “He ended up cornering himself.”

The officers kept the suspect cornered until other officers arrived a couple minutes later.

“You do what you’re trained to do,” Nicole said. “If he had left and we didn’t pursue, who’s to say somebody else couldn’t have gotten hurt in the process?”

The restaurant where it happened is about 45 minutes north of where the McKeowns live, they said, but it wasn’t their first time there. On the day they got married, about six months ago, they stopped at Raising Cane’s for their “post-wedding dinner.”

“People there are super sweet,” Nicole said. “And I love their chicken.”