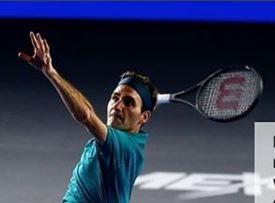 Roger Federer will not compete at the BNP Paribas Open in Indian Wells next month due to a recent knee surgery, he announced Thursday.

Federer made the announcement on his Twitter page, signaling he intended to miss the next five tennis tournaments he was slated to play, including the French Open in May.

“My right knee has been bothering me for a little while,” he wrote. “I hoped it would go away, but after an examination, and discussion with my team, I decided to have arthroscopic surgery in Switzerland. After the procedure, the doctors confirmed it was the right thing to have done and are very confident of a full recovery.”

Federer was set to be among the dozens of tennis stars including Rafael Nadal and Serena Williams to compete at the BNP Paribas Open, known unofficially as the “Fifth Grand Slam,” to be held March 9-22 at the Indian Wells Tennis Garden.

“We are disappointed that Roger Federer has withdrawn from this year’s BNP Paribas Open, but we wish him a speedy and full recovery so he can be competing again soon,” said Tommy Haas, the tournament director, on the tournament’s Twitter page following the announcement.

The 38-year-old Swiss-born player is currently ranked third in the world in men’s singles by the Association of Tennis Professionals.

Federer has five men’s singles titles from Indian Wells under his belt, include one as recent as 2017, when he bested Rafael Nadal in two sets.

But in the past six years, Federer has made the final men’s singles match four times and lost, including last year when Austrian-born Dominic Thiem beat Federer in three sets to win the 2019 BNP Paribas Open.

The Indian Wells Tennis Garden, which is owned by Oracle co-founder Larry Ellison, is located at 78-200 Miles Ave.

Stadium 1, the largest court in the venue, holds 16,100 people, making it the second-largest outdoor tennis stadium in the world.

For a full list of committed pros, visit www.bnpparibasopen.com/players/current.