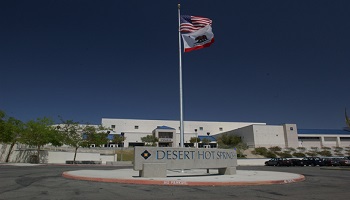 Students at Desert Hot Springs High School were greeted with metal detectors and extra security on Monday morning due to rumors of a gang fight involving weapons circulating on social media.

Panicked parents poured into the front office to pick up their kids Monday afternoon after they received this message from the high school:

We received information this morning that a parent shared on Facebook that she heard a rumor there was going to be a gang fight today at our high school involving weapons.   Police were immediately notified, along with PSUSD and site security officers. At this time, there is no indication that this is a verifiable threat. However, Desert Hot Springs Police Department is investigating the source of the rumor.  We used metal detectors at the entrances to campus this morning, and have extra security and police presence to ensure that our students and staff are safe.

Please let your child know that we are aware of the threat and are taking the appropriate steps to ensure their safety.  Should any student feel the need to speak to someone about their concerns, we will have assistance available in the office.  Please remember that if you see something, say something. As we get more information throughout the day, we will update our parents, students, and staff.

Thank you for your cooperation,

Some of the students said they don’t understand why the school wasn’t evacuated immediately.

“I just feel like the school is waiting for something to happen to let everybody out and I just think that’s wrong,” Sadie Flores, a freshman, said. “They should just let everybody out right now before anything does happen.”

“We haven’t had a specific threat, all we’ve had is rumors at this point, there wasn’t even a specific day that was mentioned,” Henson said.

The police station, located right across the street from the high school, is searching for the direct source of the threat.

DHSHS is no stranger to violent threats. In September 2019, the school made national news after three fourteen-year-old students posted on social media, threatening violence.

During the investigation police would later confiscate a pellet gun, identical to an AR-15, a 3-57 magnum with six rounds and and a semi-automatic glock, capable of shooting one round a second.

This time around, it’s just rumors, according to police. Still, students say it’s a realistic threat.

“I feel like it could happen just because there is a lot of gangs out here and I don’t know it worries a lot of parents and families,” Sadie said.

“If anything goes down at the school I have to look after my sister,” Cristian Flores said.

Police said there will be heightened security at the school for the time being but classes will go on as scheduled on Tuesday.