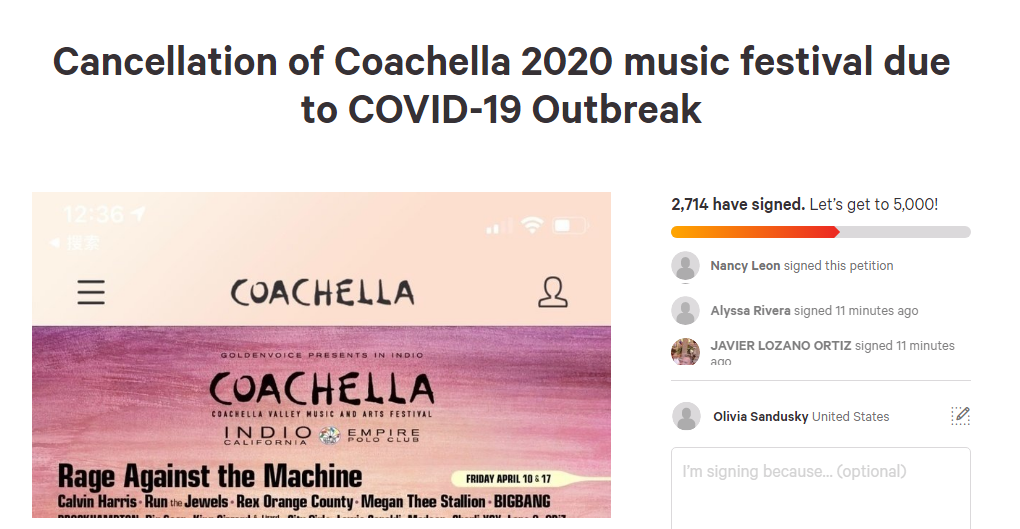 The city of Miami cancelled their Ultra Music Festival and South by Southwest in Austin is losing promoters.

Several Coachella Valley residents have signed the online form, like Melissa Mattar, a mother who is concerned about the health of her community.

“I’m glad somebody started something because it had been on my mind to raise awareness to let our people know hey there is something out there and we do need to be careful. There’s going to be people here from all around the world,” Mattar said.

Mattar purchased tickets for the festival for the first time, but is now saying she’ll no longer attend due to virus concerns.

“This year I said I’m going to splurge, I got tickets to go, and even if I can’t sell them and they don’t refund my money, I’d rather just lose the money then expose my family,” Mattar said.

But not everyone agrees, plenty of people are taking to Twitter to voice their support for the festival, and Riverside County Health officials say as of now, the show will go on.

“I have not instructed our large gatherings to be cancelled such as Coachella, Stagecoach BNP and so on,” said Dr. Kaiser, the health officer for Riverside County. “They of course need to take good stock of their attendees who are likely to attend and if they decide the risk is too great for their attendees we will of course support and facilitate that decision. ”

But some ticket buyers still say the event is not worth it.

“If it’s losing money, and I know the Coachella officials are probably worried about losing money but there’s always next year.”