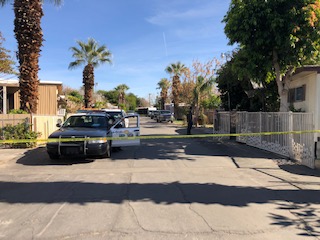 A judge Tuesday is scheduled to rule if a 28-year-old man accused in the shooting death of a woman who was found dead at a La Quinta mobile home park last year will stand trial.

Deputies conducting a welfare check at 5:51 a.m. on Jan. 27, 2019 found a 26-year-old woman dead inside a residence in the Dune Palms Mobile Estates in the 46-000 block of Dune Palms Road, Riverside County Sheriff’s Sgt Ben Ramirez said at the time. She had suffered “obvious trauma,” he said.

Investigators later pinpointed Jose Meza of La Quinta as a suspect through unspecified methods. He was arrested that morning and booked on suspicion of murder at the Indio jail, where he remains without bail.

The woman was identified as La Quinta resident Patricia Cesena.

Meza later pleaded not guilty to a murder charge, and denied sentence enhancements that included intentional murder and discharge of a firearm causing great bodily injury.

Meza is expected to appear for a preliminary hearing Tuesday morning at the Larson Justice Center in Indio, where a judge could determine if prosecutors have sufficient evidence to warrant ordering Meza to stand trial.