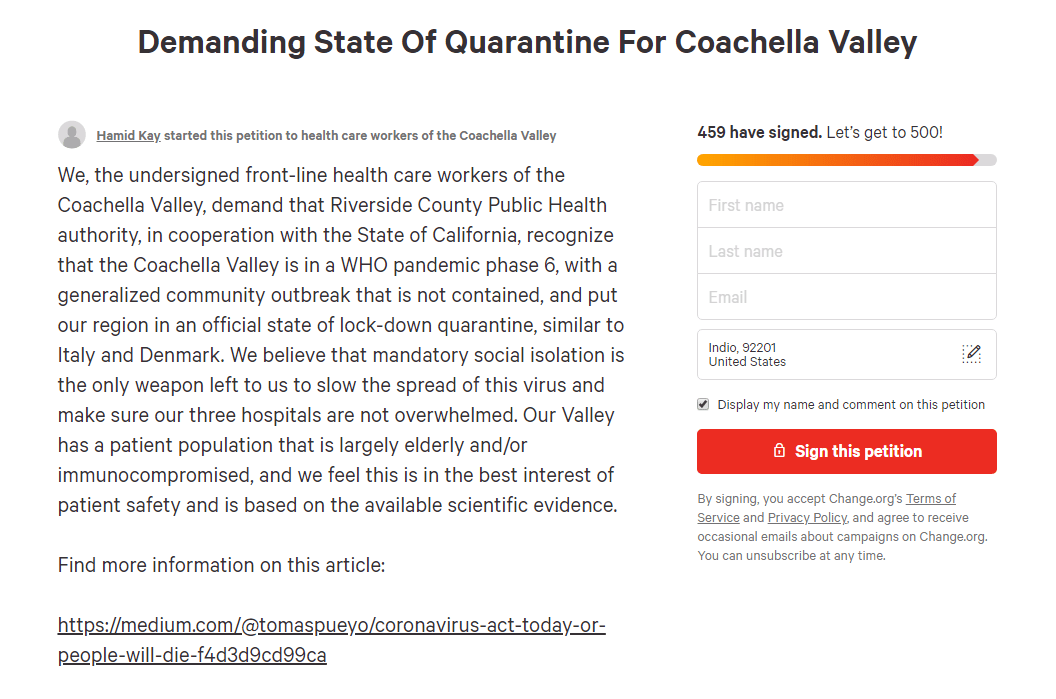 A prominent Coachella Valley doctor on the front lines spoke bluntly about the Coronavirus exclusively with NBC Palm Springs.

He has been practicing for decades, is married with children, and because he is speaking on his own and on behalf of other medical providers, and not the hospital, he asked that we conceal his identity and alter his voice for the on-air portion of the story.

In part one, he explained how the virus spread. In part two, his message is of urgency, power and hope.

“Right now looks kind of normal but people who have epidemiological training or infectious medicine training know how this will explode in a couple of weeks if nothing is done,” he said.

The doctor said he and some of his medical colleagues are concerned that with lack of immediate action, COVID-19 could take a deadly toll here in the valley.

“This is why doctors in the valley created a petition to beg the health department to put us in mandatory lockdown quarantine like Italy, France, Spain, and Denmark have. That is the only weapon we have right now against the virus.”

NBC Palm Springs reporter Daytona Everett asked, “If a lockdown doesn’t happen, what will happen at the hospitals?”

“I estimate that for the entire valley, 11,000 total cases requiring the ICU. Now, if that happens over three or six months, we will be obliterated.”

He bases those figures on research he has done on the short life of the virus in other countries around the world, adding that even if it unfolds over 18 months, it would still be very difficult to cope with.

“The UCSF panel that was held on March the tenth made very clear, the policies of the United States and the policies of Italy are the same policies. There was no screening of travelers at a time when it would have made a difference and nobody bothered to create testing technology for the front line medical providers. If we cannot find this infection with tests, then we cannot contain it. We are well past the ability to contain it now.”

He said he and other doctors and medical experts are petitioning the Riverside County Health Department immediately quarantine the Coachella Valley.

“We, the undersigned front-line health care workers of the Coachella Valley, demand that Riverside County Public Health authority, in cooperation with the State of California, recognize that the Coachella Valley is in a WHO pandemic phase 6, with a generalized community outbreak that is not contained, and put our region in an official state of lock-down quarantine, similar to Italy and Denmark. We believe that mandatory social isolation is the only weapon left to us to slow the spread of this virus and make sure our three hospitals are not overwhelmed. Our Valley has a patient population that is largely elderly and/or immunocompromised, and we feel this is in the best interest of patient safety and is based on the available scientific evidence.”

“All we have as a weapon is to have everyone shelter in place to slow down the spread to new human beings who would, some of them, ultimately need to go to the hospital. Everyone needs to assume that they could spread this. Everyone needs to shelter in place and avoid public spaces. If this is done aggressively, it may allow our health system to cope. If everything is business as usual, our health system will collapse, just like Lombardy, Italy.”

He is encouraged that approach has largely worked in China, where the virus was first detected in mid-December.

“We have seen dramatic slowings have occurred and sometimes we even see declines. You can stop the virus in its track if you stop spreading it.”

The doctor has been practicing for decades and while there have been serious epidemics in our lifetime, never has he seen a pandemic like this. His advice: don’t panic, prepare.

“This is a one in 500 years event. That’s the level. People in the valley need to prepare for this like it’s the big earthquake that we have all been warned would come someday. This is a natural disaster of unprecedented magnitude.”

With schools, churches, casinos, theaters closing in the past few days, the doctor is encouraged that some people are learning but he said more needs to be done.

“This is my message to the public, if you practice aggressive social isolation, you have an influence on what happens in this valley. Every single citizen in this valley is capable of deciding the fate of our healthcare system and whether it copes with what’s happening or we collapse.”

The doctor said in China within ten days of mandatory isolation orders, the coronavirus caseload dropped by 40 percent.

He said that may make the difference here if hospitals can handle the cases or only be able to take care of the sickest.

Join NBC Palm Springs on Wednesday for part three of this exclusive series.